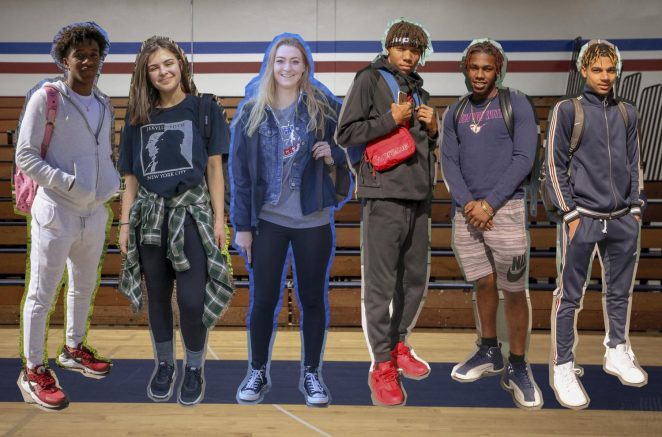 Whether you’re an insatiable gymshark or stare pointedly at the ground when walking past the Family Fitness booth, it’s almost impossible to cross the campus at American River College without seeing someone wearing workout gear as everyday attire.

Now that Lululemon leggings have become the new jeans, it’s safe to say athleisure, the trend of athletic wear being worn in social settings or mixed with contrasting elements, has become the average college student’s uniform — and it’s not going anywhere.

If you’re old enough to remember Blockbuster Video, you can probably recall athleisure being around as early as the budding 2000s when Juicy Couture tracksuits were at the peak of their reign.

While not a new concept even then, athleisure was reintroduced in recent years through social media influencers and bloggers, and has quickly become the dominating fashion trend.

The combination of sportswear and business casual gained popularity through Instagram, thanks in part to the rapid technological shift that allowed the app to become the primary source in finding out what’s fashionable.

In the early years of Instagram, style bloggers utilized the app as a visual platform to promote their websites and find inspiration for their next looks. Then, slowly but surely, fitness bloggers such as Whitney Simmons began to take over Instagram’s ‘explore’ page, drawing thousands of views and followers with videos of suggestive workouts and snaps of fashionable gym wear.

Fashion bloggers were quick to jump on the newest social media wave, marrying the fitness lifestyle with their own.

Athleisure was then ushered into high fashion in 2014 with designer Alexander Wang’s collaboration with H&M, followed swiftly by Kanye West’s collection with Adidas Originals (which would later go on to become the infamous Yeezy label) and Rihanna’s ‘Fenty x Puma’ debut.

After receiving the ready-to-wear stamp of approval, it didn’t take long for street style to begin adopting previously unorthodox pairings such as sweatpants with high heels, sports bras with blazers, or leather jackets and workout leggings.

There is something to note in trends based in fashion and function. Besides being comfortable and unisex, lately having an active gym life seems to be just as imperative as eating and sleeping, and athleisure ensures that you’re fully prepped to do so.

For ARC students such as Larynz Stallworth, comfort and convenience are some of the main reasons for wearing gym wear.

“I have morning classes every day,” he says, before gesturing to his all-black tracksuit look. “And this is way easier than putting on jeans and a jacket.”

Now that it is considered fashionably acceptable to wear workout gear across social, educational, and athletic settings, the ease that athleisure presents for maneuvering through each of these in a single day is a siren song that not many can resist.

Athleisure offers more than just comfort — by seamlessly merging sports, urban, and fashion elements, one could say it’s the perfect blend of everything California stands for. Since the urban lifestyle has become the central influencer in fashion (and let’s be real with ourselves — as Californians, did it ever really leave?), it’s no wonder so many people have latched on to it.

Additionally, athleisure allows for customization of all sorts: the power to make your look urban, high street, or purely functional rests entirely within the wearer.

“It expresses who I am,” says student Jalyn Norris, describing the way he dresses.

On one hand, athleisure could be a discouraging trend for hopeful gym-goers, since every so often you encounter those who seem to believe that if you’re unable to dress properly (read: Instagram-worthy) for the gym, you might as well not go at all.

Yet in a more optimistic light, athleisure could create a persuasive way of thinking: if you’re dressed like a fitness baddie, it could give you more motivation to actually go to the gym and adopt a healthier lifestyle.

For better or for worse, Instagram fitness culture has brought us — along with flat tummy teas, hair gummies, and waist trainers — a Facetuned life goal to strive for and a way to dress in order to reflect it.

Athleisure has dominated the market with increasingly rising sales since 2014 (according to a report by market research company NPD Group in 2015), and forecasters have predicted that it will remain for at least another decade, so perhaps it’s not quite accurate to describe it merely as a fad.

In today’s social climate, where being your best self — appearance-wise, at least — is crucial to being seen, being pretty and practical can seem like a paradox. Years ago we may have scoffed at the idea of being caught in public in our exercise gear. However, our generation is paradoxical by definition; isn’t it only natural that our clothes reflect the same?

Be the first to comment on "The rise of athleisure, and why it’s here to stay"