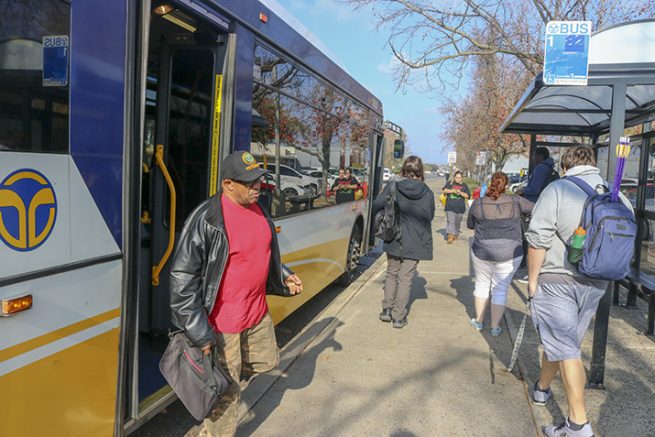 Students commute by bus to arrive at American River College while some leave campus on Dec. 11, 2018. Using public transportation is one of the many ways to help reduce emissions. (Photo by Hameed Zargry)

Climate change is one of the biggest controversial debates among experts and politicians these days. The debate has become a hotter topic among college students after experts recently shared concerns, warning that the climate is changing very fast.

In the article, authors Coral Davenport and Kendra Pierre-Louis informed readers how the globe is becoming warmer day by day; consequently, according to the authors, the increase in global warming will damage the economy as much as 10 percent.

Every group has its role in protecting the environment. Such as politicians who make policies and scientists who conduct research. But what can a college student do to contribute their part in keeping the globe green?

After briefly researching on the internet, my concerns about climate change grew by knowing that the weather changes could bring more destructions in human life by increasing floods, shortage of food and wildfires in the future. As a student, I have to ask: how can we stop these destructions?

Is it easy for students to participate in such big world decisions? Do students have the ability to change the climate?

I went to ask my fellow American River College students if we can change the climate; the answers I got were very effective — but practicing those answers is more difficult.

“Using our student card for free bus transportation and as much as we can [to] drive less,” Liu said, of her environmentally friendly efforts.

The idea sounded great to me, so I decided to commute by bus for one day, traveling 5.7 miles as example. Usually, my class starts at 9 a.m., but I changed my schedule for the day because from past experiences, I knew that by bus it will take a longer time to reach school.

I left home at 8:45 a.m., walked to bus stop 8 minutes and waited 7 minutes to catch the bus at 8:30 a.m. Although it was Friday, with less traffic that day, after taking multiple stops in each bus stop it took 38 minutes to arrive at school.

Taking carpools can also help to reduce the CO2 emissions, but for students such as me, it is very hard to commute because it takes longer and by driving my car I can save time. The other solution is buying an electric vehicle. This can be very expensive, however: as students, we often can’t afford to buy one.

Osamah Al Neama, a computer science major, also believes that reducing the CO2 emission is only possible by using public transportation and bicycles.

“We can drop the carbon dioxide emission as student by taking public transportation, riding bike instead of using cars, we can make carpool,” Neama said.

According to Google Maps, riding a bicycle to ARC will take only 29 minutes from my apartment. The suggestion sounds good but the constraints of riding in winter and hot weather summer may make that more difficult for some people. Worries about a bike’s security at school is another concern for students.

According to the New York Times article’s authors, “the weather effects and “devastating climate on the economy, health and environment, including record wildfires in California, crop failures in the Midwest and crumbling infrastructure in the South.” The destruction in the United States through globe warming is on raise.

According to the California Climate Change, “Reducing Greenhouse Gas Emissions to 40 percent Below 1990 levels by 2030,” as part of states goals given to local offices and administration for reducing the carbon dioxide emission, state should assign some goals to the people and students as well, as far as the climate is concerned.

For example, setting up more solar panels and usage of clean energy are the programs that the California government has sat forth for different organizations.

In the meantime, making or creating new schedules for saving students commuting times and setting down the bike culture in the schools are somethings that may help the environment from destruction.

A better and faster transportation system is one of the ways that students can benefit and keep their schedules. According to the Environmental Protection Agency, “motor vehicles collectively cause 75 percent of carbon monoxide pollution in the U.S.” The government focus on motor vehicles pollution could minimize the other programs it has. Exchanging the current gas vehicles for electric cars is another solution to reduce the CO2 pollution.

I discovered that the ARC students I interviewed believed in climate change. Avoiding the future disaster and destruction that authors says should be taken seriously. The cooperation between the students and government is the solution that can help the climate remain safe for all.

Opinion: Rape is unacceptable, regardless of who you are

Be the first to comment on "How can students help to save the climate?"