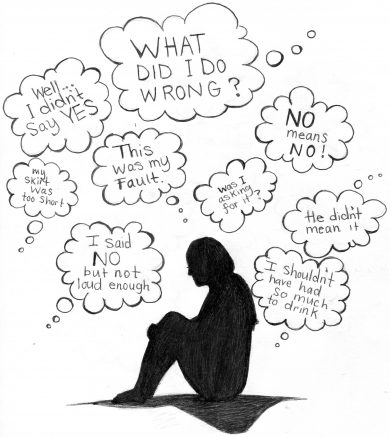 “I can be completely naked walking down the street, but if I say no, I mean no,” said ARC student Daniella McCormick.

Many people, both men and women, are unaware of what consent actually is.

When someone agrees to go on a date with you, this doesn’t constitute as consent. Flirting with someone is not consent. Sexting someone does not give you the permission to have sex with them without an enthusiastic and honest agreement in person.

“Consent isn’t a single act, it is a state of being,” said ARC professor Marcia McCormick.

This may seem like common sense, but many people don’t agree.

When a woman accuses a man of raping her, people often jump to “she was asking for it” or “what was she wearing?”

“I shouldn’t have to not wear my cute mini skirt because some guy can’t control themselves,” said ARC student Kayla Shelby.

Instead of addressing the fact that men are raping and sexually assaulting women and getting away with it, people are focusing on the fact that women need to not show so much skin.

“The problem isn’t women’s clothing. There isn’t a huge epidemic of lesbians attacking and raping women for being drunk or (showing a lot of skin),” said Shelby.

A lot of people ask, if women are being sexually assaulted, why don’t they just come forward?

When a woman accuses a man of assaulting or raping her, people assume she just regretted the sex, or when a woman waits she’s just seeking attention or some type of compensation.

When a woman comes forward with her story, people assume she fabricated it and they began victim blaming.

Victim blaming is the act of holding the victim at fault instead of the perpetrator.

Most people use victim blaming questions like, “well, what were you wearing?”

Brock Turner, 22, a privileged and convicted rapist served just half of six month sentence for raping an unconscious woman behind a dumpster.

Instead of America coming to the victim’s defense, people criticized the woman for drinking too much and the media used Turner’s school photo instead of his mugshot.

“It makes me so mad that this country hates women. Men can literally do whatever they want and not be held accountable. You can rape someone, no questions asked and get away with it,” said ARC student and English major, Charlotte Evans-Smith.

But what if women acted this way? The idea that women and men are treated equally is a fairytale, especially for women of color and transgender women.

What if Hillary Clinton bragged about sexually assaulting younger men and referred to it as “locker room talk?”

“I’m personally offended that (Donald) Trump is still being considered for president. I have two daughters and I don’t want to raise them in a world where people think grabbing women by their genitals is acceptable if they’re considered to be beautiful women,” said ARC student Rosila Perez-Diaz.

What exactly can be done to change people’s outlook on what is acceptable and what’s not?

“This country needs to do a better job of respecting women and explaining consent,” said ARC student Esmeralda Sanchez.

When your partner verbally agrees to engage in sex or sexual like activities, you have been granted consent.

If more people understood consent, more women wouldn’t be facing the stigma of being sexually assaulted.

Instead teaching young girls that if they speak up, no one will listen, we need to do a better job of raising our sons.

The Current’s ballot guide to the 2018 elections

1 Comment on "Opinion: Let’s talk about consent – and what needs to be said"