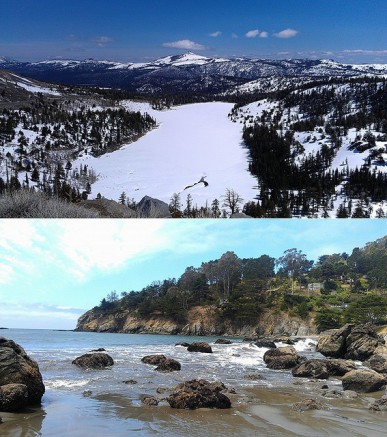 Above, Red Lake is located in the Carson Pass along Highway 88 south of Lake Tahoe. Below, Muir Beach is located north of San Francisco and is located near several trails that can eventually lead to views of the Golden Gate Bridge and Pacific Ocean. (Photos courtesy of Matthew Peirson)

Everyone knows California is a gigantic state, but when it comes to exploring what’s around, people tend to limit their options and miss out on the true variety of experiences available.

Sure, everyone enjoys a trip to Disneyland, seeing Hollywood and the adventure that is San Francisco, but there are plenty of less-heralded, less talked about areas that are the true essence of the golden state.

That’s not to say that there’s anything wrong with the above places, but more so that California has unique topography and variance in lifestyles not found in many parts of the world, let alone the U.S.

Travelers come from all over the globe to visit the likes of Yosemite National Park, the Redwood forests and Death Valley, among others.

For those that call California home, it’s only a matter of hitting the road and seeing what there is to see.

It’s simply good to understand the entire landscape of the state, in addition to personal niches and comfort zones.

The drive along the central coast on Highway 1, stretching from south of San Francisco and going through Half Moon Bay, Monterey, Carmel and Big Sur provides views of rock-crested beaches to one side and lush hills to the other.

Hiking trails are abundant all throughout the Sierra Nevadas, from both Lassen and Plumas National Forest, north of Lake Tahoe, to El Dorado and Stanislaus National Forest in the south.

Point Reyes and Drakes Bay north of San Francisco offer one of the most geographically unique coastlines along California’s edge.

Even the Central Valley (consisting of both the Sacramento and San Joaquin Valleys), stretching over 450 miles from Redding to the small town of Grapevine, is worth exploration simply to see its mass and understand how and why it is one of the largest agricultural areas in the world.

Exploring the different parts of California also gives a glimpse just how different one place can be, from the mass of humanity in Los Angeles to more medium-sized cities such as San Jose and Sacramento, to the small town of Orick, neatly nestled between Eureka and Crescent City near the California-Oregon border.

So climb Mt. Diablo on the edge of the East Bay and see the views, explore the Trees of Mystery in the heart of Redwoods National Park, hike through Muir Woods or even stop at the general store in Sattley to grab a 7-Up for the road.

California’s a big state with something for everyone – it just takes the motivation to go out and find it.

Be the first to comment on "Opinion: California should be appreciated for what it really is"