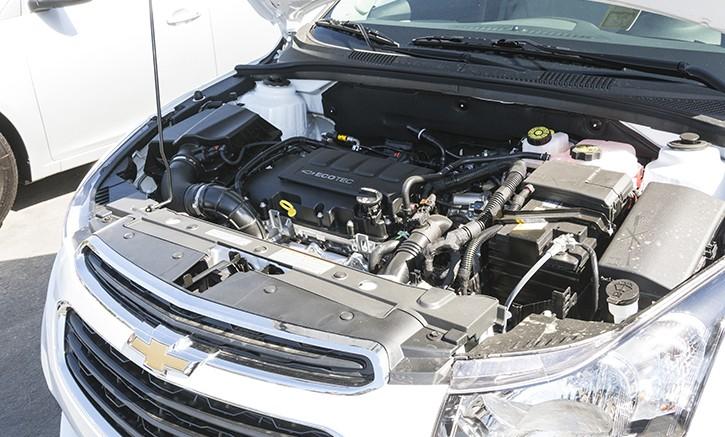 Gas-powered cars, such as this Chevrolet Cruze, provide consumers with more comfort and better performance than electric cars. (Photo by Joe Padilla)

A previous version of this story and the photo caption incorrectly stated the car model as a Chevy Cruz. It is in fact a Chevy Cruze.

Gas-powered cars have ruled the roads for over 100 years now, but as electric power becomes popular, gas and diesel-powered vehicles really need to show drivers what they can do.

Some people have grand ideas of buying an electric car and saving the world one mile at a time, but show up to the dealership to get some serious sticker shock.

The reason that the pricing is such an issue with these electric cars is the lack of quality, comfort, performance and overall refinement.

Early and current models of electric cars really lacked when it came to nice interiors.

The car would end up having some low quality fabric seats, plastic parts everywhere and not much in the terms of styling.

A car that has a base price of $30,000 should have a better interior than a $20,000 that has leather seats and metal instruments.

The main mission of the electric car is to find an alternative to gasoline before it all runs out and to help clean our environment.

Now with the combustion engine being engineered with far better technology and engineering, there are ways to get really good performance, create less CO2 emissions and get great fuel economy.

Chevy is a good example of this move toward small and smartly built engines with their eco engines that can be found in the Cruze with either a 1.4L Turbocharged or a 2.0L Diesel.

According to Chevy, both of these engines on a full tank can get from 530-700 highway miles of range before they need to be filled, which is far better than something like the Volt (Chevy’s electric powered car) which can get only 38 miles on one charge and then the gas-powered engine turns on to create more electricity and stretches the range to 380 miles.

Performance is another category that electric vehicles (EV) suffer in for the most part, which is understandable because their purpose is not to set lap records.

But when most EV’s average around a 10 second time to go from 0 to 60 miles per hour, it’s hard to slow down and speed up quickly.

Gas-powered engines — no matter what their size — can deliver great power. It may not be as quick as an electric car, but it is more powerful.

According to Car and Driver Magazine, the 2015 Ford Fiesta with 123 horsepower and a 8.7 second period of time to go from 0 to 60 miles per hour can easily outperform the Volt and pull the final trump card with a 120 miles per hour top speed where the Volt can’t even touch 100.

The mission that the electric car was set out for is a good one, but the battery technology has not come along yet to make them powerful enough or long lasting enough.

Be the first to comment on "Opinion: Gas powered cars still better for consumers"