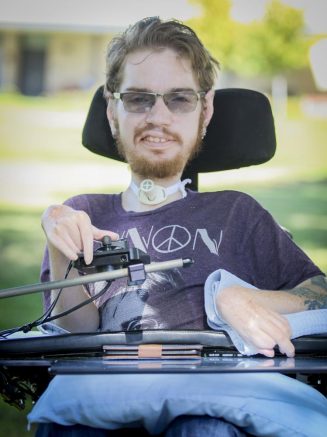 Bauer had attended classes at ARC for the past 10 years and had switched majors multiple times before finally deciding to pursue a journalism major in his final semester. Bauer was a staff writer on the AR Current.

On the day before his death, Bauer attended the annual Northern California Journalism Association of Community College Conference in Cupertino, California with his classmates from The Current. He had told his colleagues that he had finally found his true passion and was planning on finding a career in the journalism world after he graduated.

According to Sherri Bauer, Nathan Bauer’s mom, she believed her son had finally found something he could do independently. Bauer suffered from a lifelong condition called spinal muscular atrophy.  This condition caused much of Bauer’s body to be paralyzed. By the age of 33 he only retained the movement of two fingers.

Maybe add a sentence here: That didn’t stop him from pursuing journalism, however.

“He might have needed help to write notes or photograph, but he could write his stories on his own,” Sherri Bauer said. “That was the one thing he could do and he could do it so well. Nathan was always impressing me with his writing.”

Bauer had found a strength on The Current in opinion writing. He used his firsthand experience of the difficulties of navigating campus to call for ARC to improve its handicap accessibility.

And Bauer was a bit of an expert in accessibility.

Bauer actually became the youngest person in Sacramento to ever be prescribed a motorized wheelchair.

“The doctor wanted to just write the prescription [for the wheelchair] for Nathan because he felt bad for him but I wouldn’t let him,” Sherri Bauer said. “I wanted Nathan to pass the test on his own merit and he did. He flew right through that obstacle course.”

When doctors first told Sherri of Nathan’s condition, he was only 7 months old. Doctors told her that the most-likely scenario would be that Nathan Bauer would only live until the age of 2 or 3.

Sherri Bauer said she made it her life’s goal to make sure that Nathan Bauer not only beat his initial prognosis but that he had as normal as life as possible.

“He got to travel all over. He’d been to Canada, Hawaii and all over the United States,” Sherri Bauer said. “He travelled more than a lot of his friends who weren’t in wheelchairs.”

Nathan was a passionate writer with a constant stream of ideas, and would pursue his stories with the drive of a true journalist. Bauer’s steady stream of witty, sarcastic jokes and passion for journalism brought light to The Current newsroom, as well as in his other classes.

Theater professor Pamela Downs struck up an especially strong connection with Bauer after he decided to enroll in a few different performing arts classes.

“From the beginning I didn’t see him just as another student I saw him as the warrior that he is,” Downs said.

Downs added that Bauer’s character and strength of will are things she won’t soon forget.

“It’s not the cards that you are dealt with, it’s how you play them and he was an example for everyone,” Downs said.

Bauer’s legacy was honored with a celebration of life ceremony on Oct. 28 where his friends and family gathered in Hagan Park. The ceremony concluded with dozens of colored balloons being released into the sky. 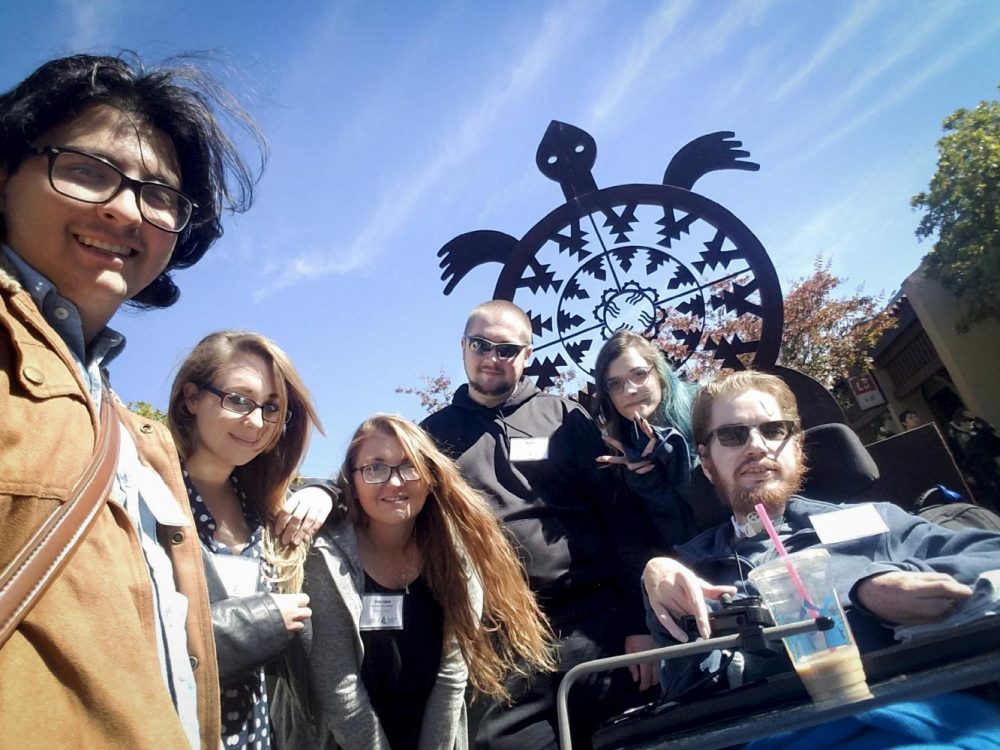 Staff members of the American River Current (from left to right: Luis Gael Jimenez, Ashley Hayes-Stone, Brienna Edwards, John Ennis, Hannah Yates and Nathan Bauer) pose for a photo at the annual Northern California Journalism Association of Community Colleges Conference at De Anza College in Cupertino, California on Oct. 21. Staff writer Nathan Bauer died the day after this photo was taken. The cause of death was a heart attack; Bauer died at home. The long-time American River College student was 33. In one of his last Facebook posts, the journalism major shared his thoughts on this country: “I don’t know, but I do know that I love my country, and I want to see it be a better place. I don’t deny we have flaws, but I believe with hard work, patience and more understanding we can overcome them. Maybe I’m naive, but hopefully in the best way.” (Photo by Luis Gael Jimenez)

Bauer’s last Facebook post before his untimely heart attack ended with a statement about the current state of national affairs.

“I don’t know, but I do know that I love my country, and I want to see it be a better place. I don’t deny we have flaws, but I believe with hard work, patience and more understanding we can overcome them. Maybe I’m naïve, but hopefully in the best possible way,” Bauer said.

And seize the day he did.

Rest in peace,  Nathan. Thank you for being in our lives and for everything you did for our paper.

Worthy Goat is worth the listen