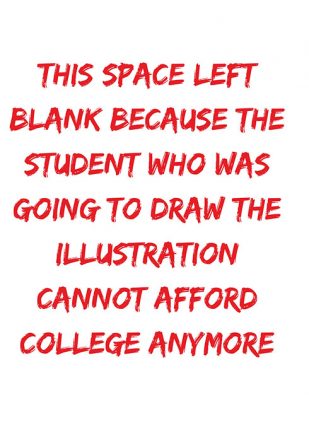 Trump's proposed budget could lead to billions lost in Pell Grant cuts. The Pell Grant was created in 1972 and originally it was named the Basic Educational Opportunity Grant; in 1980 it was renamed after Senator Claireborne Pell for his efforts in creating the program. The University of Phoenix awarded $96,589,867, the most in Pell Grants 2015-2016. (Photo illustration by Cheyenne Drury)

President Donald Trump proposed an outline on March 16 that intends to cut nine billion dollars from education, for higher education a.k.a  universities and community college students this means Pell grants and federal work-study programs are at risk.

According to information posted on The Association of Community College Trustees website “Each year, the Pell Grant program enables more than three million community college students with financial need to pay for tuition, books, transportation, and living expenses.”

If these deductions are put into place $3.9 will be taken from Pell’s $10.6 billion surplus. Not only would this take from the surplus but it could jeopardize prospects to strengthen the grant or restore year-round Pell grants.

When looked at from a statistical standpoint, many students will not receive as much funding as they would if the surplus stays the same.

There are still many uncertainties revolving around the new proposal, it is not specified whether the White House will maintain the Pell Grant’s yearly maximum at $5,920

“If we get a recession and demand for the Pell Grant spikes, we’re going to get a shortfall really fast,” said Ben Miller, senior director for postsecondary education at the Center for American Progress, according to information from Inside highered’s website

Though, the Pell Grant is just one source of funding, other programs are at risk as well.

The Federal Supplemental Educational Opportunity Grant is reserved for college students with the most need for financial support to attend school.

According to Inside Highered’s website, “If these changes are enacted, “It [will] eliminate entirely support for the SEOG program — which serves students with household incomes similar to Pell recipients — while calling for “drastic” cuts to the Federal Work-Study program,” said Andrew Kreighbaum, a federal policy reporter for Inside Highered.

Also in jeopardy are “The Federal TRIO Programs (TRIO) are Federal outreach and student services programs designed to identify and provide services for individuals from disadvantaged backgrounds,” according to the webiste ed.gov.

The budget proposal said that funding to TRIO programs would be cut “in areas that have limited evidence on the overall effectiveness in improving student outcomes,” said Johnny C. Taylor Jr., president and CEO of the Thurgood Marshall College Fund, according to information gathered from Inside Highered’s website.

These budget cuts affect every college student who relies on financial aid but at the community  college level it will have more of an impact. The direct reason zeroes in on the fact that most undergraduates are not your traditional ‘college student.’

These are some of the factors that make many undergraduates rely heavily on financial aid, with less money for grants that means the bigger disadvantage community college students will face.

Then there is the added stress of having to work to support themselves and pay for school. “About one third of community college students work full time while attending school (32.4 percent)” According to information from ACCT’s website.

This means that 32.4 percent of students will have to be even more tight with their money, take fewer classes or work overtime to support themselves through school and according to ACCT’s website  “seventy eight percent of Pell Grant recipients at community colleges are working students.”

For some students like ARC alum Marina Chavez, “The pell grant program is more than just financial aid. It is sometimes the only reason someone is able to go through the grueling four to six years of school. It’s not just the financial part, it’s also an emotional and mental motivator,” Chavez said.

Mens basketball in pursuit of a playoff berth

Be the first to comment on "Make education expensive, again?"