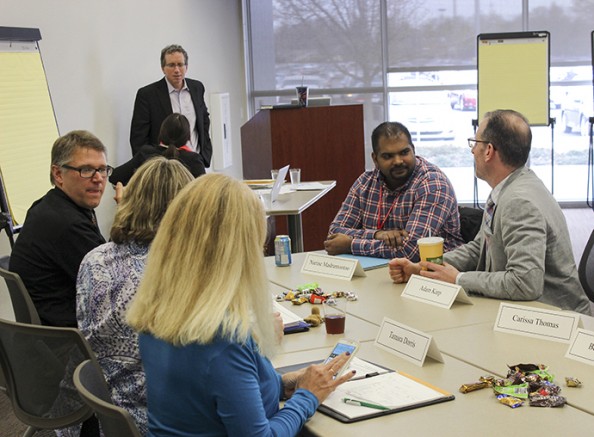 The Los Rios Community College District held a town hall meeting at American River College on Feb. 11 to discuss the strategic planning process for the district over the next five years.

The district’s Board of Trustees, along with students, faculty, staff and administrators from all the Los Rios campuses, gathered to brainstorm the new plan’s proposed vision, a mission statement and values and goals of the district.

The Weiss Group is assisting the district to expand and succeed by developing strategic focus, building organizational capacity and achieving businesslike objectives.

Steven Weiss, president of the Weiss Group, also shared his thoughts on the importance of the gathering to confirm the school and district’s common priorities, goals and strategies.

“I like to think of the strategic plan as a road map,” Weiss said.

Deputy Chancellor Sue Lorimer believes that this new plan will be even more effective than the previous strategic plans that range from 1997 through 2016.

“It gives us agreed upon direction,” Lorimer said. “You can only agree if you include each other.”

Los Rios Chancellor Brian King referred to the meeting as “a great time to think about the future and talk about where we are at and where we want to be.”

King stressed the issue of bridging the gap between what students need and what outsiders think about the district.

King added that the ARC campus had more students to attend the town hall meeting than any of the other Los Rios community colleges.  The number of students involved in discussion making has improved throughout the years.

Weiss expressed his ideas of how the new plan will affect the community and the idea of making indicators that will track the district’s progress.

The Strengths, Weaknesses, Opportunities and Threats (SWOT) analysis focused on the outline that the strategic plan is to go by.

Weiss also mentioned that the main goal was for the group to find ways to help students find their success.

The meeting involved input from all attendees as Weiss separated the groups by table and had a spokesperson the lead the group into a brainstorm.

Ashley Davis is a first-semester student on the Current, where she serves as a staff member. She plans to get her AA and transfer to study journalism and mass communication.