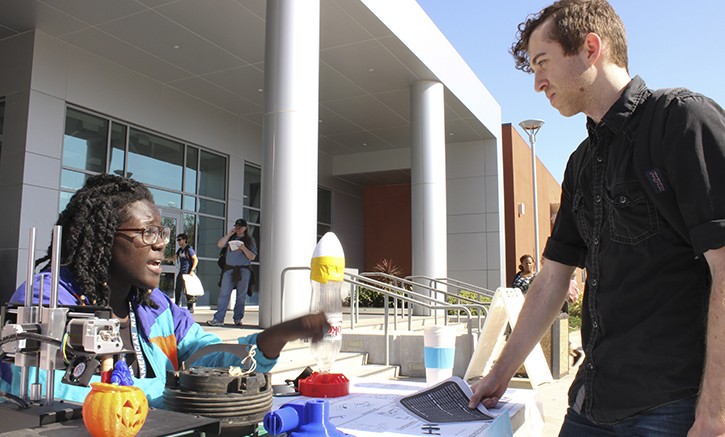 American River College student Cecile Thompson speaks with student Nemi McCarter about the Engineering Club. Thompson was chosen to participate in the NASA onsite experience at the Armstrong Flight Research Center in Edwards, California where she will create a rover that must be able to function properly if placed on the surface of Mars. (Photo by Lena DoBynes)

Three American River College students will have the opportunity to participate in a three-day on-site experience at a NASA facility in California on Oct. 25.

Souv heard about the program through the Mathematics, Engineering, Science Achievement (MESA) program on campus, a learning community that seeks to help students in the fields of math and science perform well academically and grow professionally.

“I have followed the activities of NASA over the years and to have an opportunity to be involved was just too good to pass up,” said Souv.

In order to apply, each applicant is required to provide personal information, such as his or her name and address as well as educational information, a 300-word essay on the reason the applicant was interested in the NASA experience and a letter of recommendation.

If NASA selects a candidate’s application, he or she moves on to the next phase of the program, a web-based learning course.

During the five week online course, applicants are required to listen to webinars from NASA engineers and scientists, read materials provided by NASA and take tests on them as well as design a 3-D model of a  rover and plan a mission to Mars.

Thompson’s mission focused mostly on obtaining water from the rocks on Mars with the goal of creating a Mars atmosphere that could one day be “Earth independent.”

“According to the material I read on the online portion, the closer that you got to the core the higher chance of finding water and in the martian rocks there was some degree of water within them that could be obtained by compressing the rocks.

“So my mission was pretty much taking these habitats that they created with enough water supply to last for a little bit, and while using that water supply, drilling on Mars and compressing all these rocks to obtain more water so that we can keep these ecosystems going,” said Thompson about her mission.

Thompson believes she was picked to participate in the program because of the rebellious path she chose.

Salazar believes the program is a way for NASA to find fresh ways of thinking.

“NASA is trying to get new ideas, because there is only so much that maybe 100 people can think of, but if you got the masses to put in their information, too, even if it is anonymous you could find something that’s worthwhile,” said Salazar.

Once the online portion of the application is completed, NASA selects a particular group of students who stood out during the web-based portion and offers them a chance to stay onsite at one of the 10 field centers spread across the United States.

Activities while on-site include working on an investigative team project headed by NASA engineers, attending briefings by engineers and scientists and touring the NASA facilities.

While Souv and Thompson were surprised and excited when they heard about their acceptance to participate in the on-site experience, Salazar, who was working 16-hour shifts on top of going to school at the time, had mixed feelings.

“Honestly, inside I was really excited, but physically I showed nothing because I was constantly thinking, ‘that’s great but what’s next.’ It just kind of became old news in five minutes.”

Salazar and Thompson will be attending the field center at the Armstrong Flight Research Center at the Edwards Air Force Base in southern California to perform research-based projects and create rovers that could land on Mars and collect data.

Souv will travel to the Jet Propulsion Laboratory in Pasadena, California to learn about project management for large projects and create a fictional, model company that can compete against other companies.

Joker is a depressing, creepy look at society