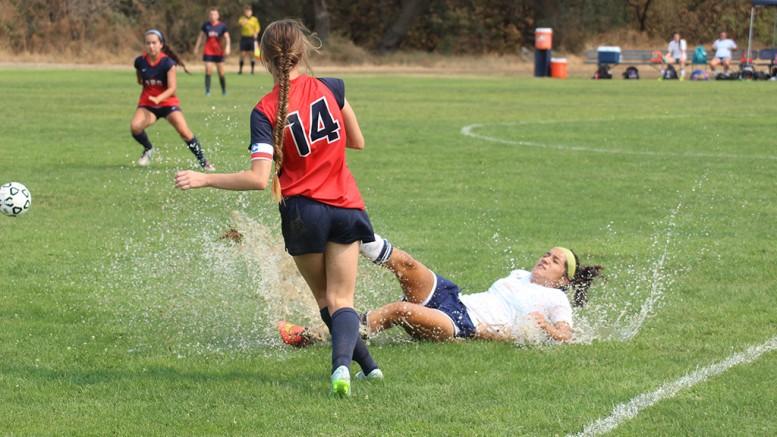 Over-testing of one of the two wells on the American River College campus left the field for the ARC women soccer team's game against Yuba college on Sept. 11 soaked with water. Testing is required as a part of building the new well. (Photo by Matthew Wilke)

Required testing for replacing one of American River College’s two water wells left parts of the athletic fields soaked, even during one of the matches for the ARC women’s soccer team on Sept. 11 despite the recent heatwave.

The temperature in Sacramento reached a high of 101 degrees that day, with highs of 106 on Sept. 10 and 105 on Sept. 9 preceding it, according to accuweather.com.

The women’s soccer team played at 2 p.m. and the field remained saturated with water pockets throughout the match despite the high temperature.

In this particular instance, the well was tested the night before, on Sept. 10.

The fields were also used throughout the day for the football team’s practice and the men’s soccer team.

The testing is required as part of the process of constructing a new well, according to Scott Crow, ARC’s public information officer.

The testing is run by the contracting company Hydro Resources West, according to ARC Director of Operations Dan McKechnie.

“Proofing a well is part of normal constructing procedures. We used that lower part of that field,” McKechnie said.

McKechnie said that an agreement was made with Hydro Resources West to only pump water from 7 p.m. to 7 a.m., so as to minimize the effect of the fields.

“That would allow the field to percolate and dry up during the day,” McKechnie said.

McKechnie said the saturation was caused by the extensive times in which the well was tested, which can be up to 12 and even 24 hours nonstop.

“That particular instance was one of the heavier dumping times, so that didn’t allow the field to be dried out,” McKechnie said.

McKechnie added that the pumping must occur for a little longer than the set times, meaning the field could’ve been taking on water for slightly more than 24 hours.

ARC women’s soccer head coach Paul Arellanes said that testing was supposed to occur on Sept. 9 so as to allow the field to dry out on Sept. 10, but was delayed.

He said, however, that the conditions weren’t a catastrophe for his team.

“It wasn’t optimal, but there might be times in October, November where it’s been pouring rain and we still have to play,” Arellanes said.

Arellanes acknowledged there is factor of player safety, but it could also be a problem if the field is too dry.

“There’s always that potential,” Arellanes said of the wet field being potentially hazardous. “But you also have the potential when it’s (the field) hard to bang your head and get a major concussion.”

McKechnie said the school did its best to find a happy medium between not affecting the playing surfaces while still working with the contractor.

“It’s a balancing act between a mandate that we set and them (the contractor) being within their contract,” McKechnie said.

McKechnie added that the coaches and referees still have the final word on whether or not they feel it’s safe to use the field or play a game at any given time.

“If we have a game and it rains, it’s up to them to decide if they want to play,” McKechnie said. “If it would’ve been too soggy we would’ve rescheduled it just like it was a rain delay.”