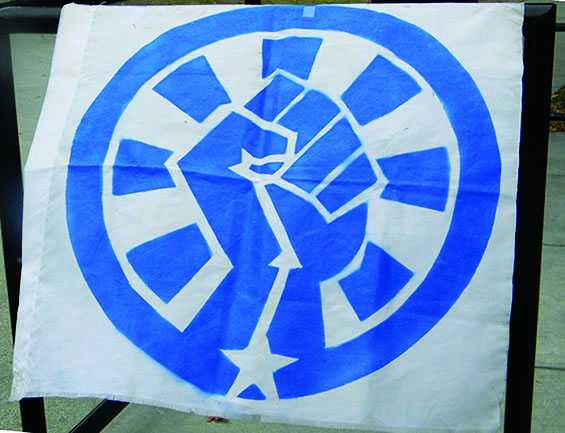 By Brandon Nelson and Ashlynn Johnson

The non-profit organization 99Rise, a political protest group that is trying to remove big money from politics, has made its way to American River College in an attempt to inform and recruit students.

99Rise was formed in Los Angeles out of the ashes of the Occupy Wall Street movement.

They describe themselves as “a network of activists and organizers dedicated to building a mass movement to reclaim our democracy from the domination of big money.”

“Democracy isn’t working for 99 percent of the population because of the influence of the 1 percent wealthy,” said ARC 99Rise Vice President Erik Asleson.

99Rise now has groups in cities across the nation and are also in the process of becoming a club on campus, with all the necessary paperwork turned in.

In order to obtain their goal, 99Rise plans to use peaceful protests and lawful disobedience to enact change with at least 3.5 percent of the population.

In terms of school activities, they plan to host a college hour where they discuss the history of noncombatant demonstrations during the civil rights movements.

“Our focus is on education and discussion,” Laura Rubalcaba, 99Rise’s Sacramento Co-leader, said, “because our actions are more political.”

99Rise’s logo is a raised fist that is reminiscent of many civil liberties movements in history.

“The fist is solidarity,”  said Rubalcaba.

99Rise’s plan includes four phases. The first phase is to build the movement, the second to create more mass civil disobedience, third to unite the movement and the fourth is to finally escalate to mass noncooperation.

While 99Rise may govern themselves by these rules, they are subject to change .

Although they have mostly been doing recruiting on campus by posting flyers and setting up a booth, they are planning a get together where all members will meet and greet one another.

They also plan to hold at least one protest before the next general elections.

A get together was held on Sept. 28 from 2 p.m. to 4 p.m. in Southside Park on 2115 6th St. All 99Rise asked that members bring a three to five dollar donation, or a pie to share with others as a symbol that everybody should get a piece of the pie.

Be the first to comment on "99Rise recruits ARC students"