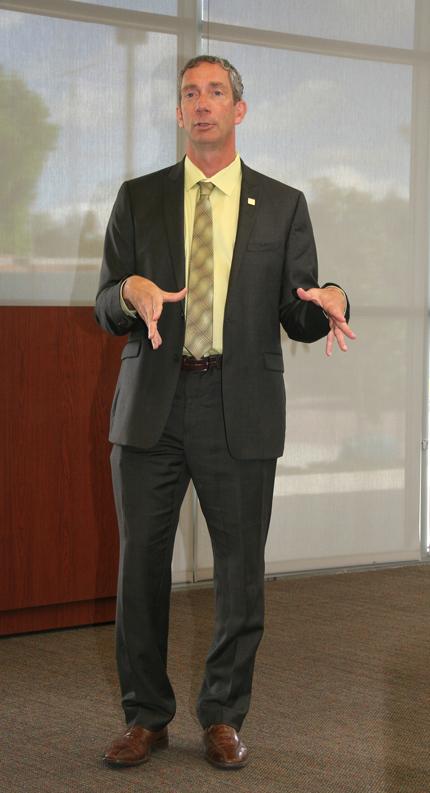 King led the program and kept the topics of dialogue open to the attendees, but a major focus of the discussion was Monday’s Sacramento Bee article detailing the California Community College Chancellor’s Office Student Success Scorecard, which indicated declining six-year graduation rates at ARC and other Sacramento-area community colleges.

“We don’t have a time machine to change things six years ago,” said King. “(But) the Student Success (Initiative) and all the great things we’re doing now, we’ll see some of the results on down the road. That’s one problem with the scorecard number. It’s a snapshot in time.”

Latest data doesn’t reflect the efforts put into the implementation of increased assessment, counseling and educational planning from the past several years.

“The data is imperfect, but that’s what’s available to the public,” said King. “What do you think the public perception is?

English professor Diana Hicks addressed the need to educate the public about the roles and challenges of a community college.

“I think there’s a certain frustration that (the public is) … funding us publicly, and that we’re not getting the same success that they deem that we should be getting,” Hicks said. “I also think that we’re not doing a good job of (communicating) what condition the people are coming to us in, so that they realize why we don’t always have the success rates, that we don’t get to choose our population. We’re not a CSU or a UC and everybody comes in every condition.”

The data won’t reflect the transformation that takes place in some community college students over the course of several years.

Some students take classes with the intent of gaining new skills for the workplace, and gaining those skills doesn’t always necessitate getting a degree. If those students, or students who are attending for enrichment purposes, are getting what they want out of the programs they are in, the programs are doing their jobs.

King also noted that just because a student graduates and is eligible to transfer to a University of California or California State University campus doesn’t mean the campus has space for that student, so the transfer rates can be skewed.

Several participants mentioned a need to work toward changing the perception of ARC as a last choice school.

“Make it a choice, not just an alternative,” said Kipuke after the event.

Kipuke said he’d like to see a rebranding of community colleges, to make them the “cool thing.”

ARC is missing out on a “key demographic,” Kipuke said, in the students who are ready for a four-year college academically, but may not be ready socially.

Counselor Manuel Ruedas also expressed concern about a lack of outreach concerning the increasingly restrictive changes in registration and Board of Governor’s Fee Waivers, particularly to students whose families need resources in languages other than English.

“One of the areas that I think we lack in historically as a district is a coordinated outreach and communication to our local communities,” Ruedas said. “The word isn’t getting to the high schools, it’s not getting out to underserved communities, not getting out in multiple languages, Spanish, Hmong … The processes becoming more restrictive are impacting people that are more marginalized already.”

The discussion also turned to the need for school growth to meet the school’s targets in terms of state funding based on enrollment.

“But I don’t think we have to do that at the sacrifice of focusing on student outcomes, too,” King said.

The recent boost in funding from Proposition 30 means more new classes and allows ARC to advertise for the first time in several years.

“This year we are behind pace for enrollment from last year,” King said.

Other concerns included the need to promote the sustainability committee on campus and to invest resources in moving ARC along the path to being a more sustainable and environmentally-minded campus.

“AB 32 (the Global Warming Solutions Act of 2006) requires there be a climate action plan in place,” said Don Reid, printing services supervisor and chair of  the Green Office Committee, which has been implementing a program through which departments, offices and individuals pledge to “green” their daily activities.

“Community colleges are about five years behind” where they need to be on sustainability projects, according to Reid.