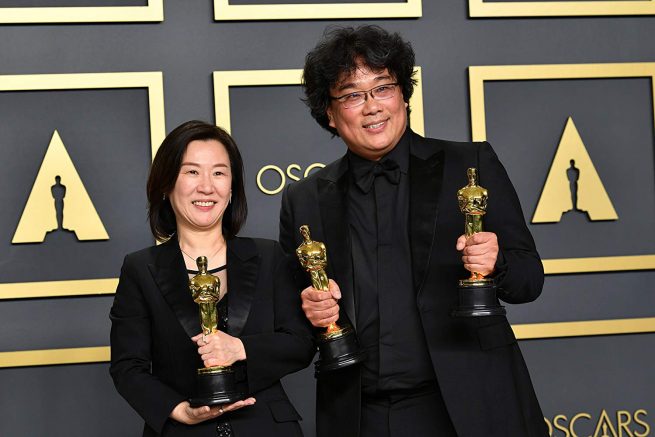 Bong Joon Ho and Kwak Sin Ae pose with their awards at the Oscars. (Photo Courtesy of IMDB).

“Parasite” is about classism and the dichotomies of two worlds. The film is full of drama, crime and a little comedy as it follows the web of illusions spun by the characters.

The themes of classism and social inequality are displayed through the two families, the poor, sub-basement living Kim family, and the wealthy, modern mansion living Park family.  Classism is masterfully presented through how the two families interact and react to each other’s existence.

“Parasite” is significant because its a carefully crafted movie, but also is a Korean-made film, starring only Koreans, whereas the majority of the Oscars this year were dominated by movies like “1917”, “The Irishman”, “Joker”, and “Once Upon a Time In Hollywood,” starring  a bunch of white men, made by a bunch white me. This Korean film beat the norm out to be the first non-english speaking film to win the well-deserved Academy Award for Best Picture.

The Kim family prospects the Park Family as resources to be used and drained of all they have. This is exhibited in the systematic way that the Kims insert themselves into the lives of the Parks to better their lives no matter what.  While the Parks utilize the Kims only as long as they serve the Parks, while the Parks are only concerned about the surface of what’s around them.

Director Bong Joon-Ho (“Snowpiercer,” “Okja”) perfectly captures the tension between the classes and how it breaks as the characters become more intertwined.

The performances by Kang-ho Song, who convincingly plays Kim Ki-taek, the father of the Kim family, a man willing to do anything to ensure that his family gets a better life, is deserving of all of the praise. Yeo-jeong Jo who plays the bumbling but loving mother of the Park family, wonderfully captures the humor in the character’s naiveness but also in setting up the chaos that her naiveness brings.

“Parasite” proves that Hollywood should invest in original movie ideas and screenplays, not just in another reboot of another franchise.

Parasite is a masterfully written and beautifully shot film, building tension as the Kim family hides secrets from the Park family and thrills in the smallest of moments, leading up to an explosive and cutting finish.