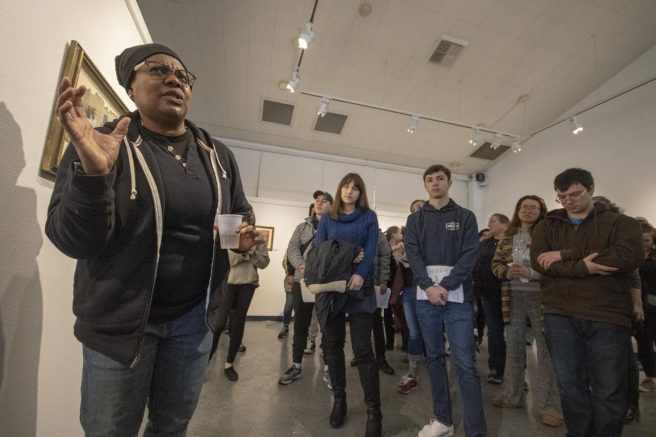 Old and mismatching picture frames adorned the walls of the gallery; inside are paintings of different subjects on distressed paper. The subjects of these paintings are mostly children, incorporated with repeating symbols related to time.

A crowd of art professors and students crowded into the Kaneko Gallery for the reception for “Piece$,” an exhibition by Fan Lee Warren, on Feb. 28.

Lee Warren shared her story behind the exhibition, which ties back to her own childhood and neighborhood in Chicago, Illinois.

“Art has always been part of my childhood,” she said. “I went to a lot of cultural events; I went to plays and dances, and things like that so I just thought everybody did that.”

She returned to her hometown as an adult to take care of her sick mom. She said she couldn’t help constantly noticing the lack of children playing, and began to draw them out of curiosity.

“[The kids] could not stand out and play ball and they couldn’t do all the things that I did as a child because the neighborhood didn’t allow it,” Lee Warren said.

The neighborhood is part of the ‘heroin highway’ in Chicago, and in recent years has become increasingly unsafe due to the drug trade and gang activity.

Once she reflected on the differences, she was able to better understand and incorporate the experiences into her work.

“This took awhile you know, I had to realize … this is a whole different generation,” she said. “They have their whole different situations that they have to deal with and so maybe I should take my old opinion and adjust it.”

In addition to the recurring theme of children in the paintings, all of them contain an important symbolic shape: a spiral.

“The ancient transformative spiral symbol of evolution and life remains anchored in my compositions as a connection between my current and past work,” read the printed statement.

While the spiral is a key component to her pieces, it isn’t all that uncommon, according to the artist. She said she learned about the symbol in 80s Chicago, where the “art mark” was a common sight in pieces. But according to Lee Warren, the prevalence of the spiral goes far past the 80s.

“I realized that this is an ancient symbol, that you can go to every culture in the world, and you’ll find a [spiral] in their ancient art.” she said. “ … You can see it in a tree, you can see it in the water, and this is why people have it in their various cultures. But also the spiral goes all the way back to the goddess, the mother, the first.” 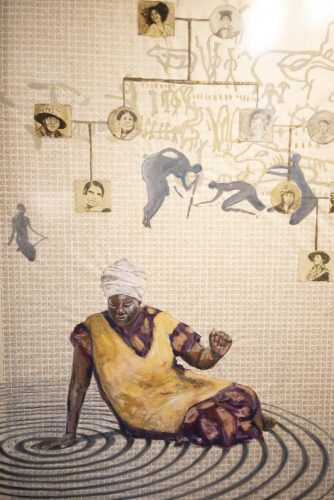 Laney College art professor Fan Warren’s “She Forgot Where She Comes From” hangs in the Kaneko Gallery on Feb. 28, 2019. (Photo by Ashley Hayes-Stone)

As time goes on, the meaning of the spiral in each piece of art changes.

“The layers of my work are feeding that spiral,” she said. “The things that happened in the past are affecting … the present.”

Computer science major Jessica Higgins, said during the reception that the spirals were what drew her in.

“It’s just so different. And it’s very eye catching, like from afar I see these spirals,” Higgins said. “It looks exactly the same across the room as it does right here, which is very cool.”

Another notable element of the paintings in “Piece$” is the actual paper; yellow-brown, with uneven burnt edges.

“All of [the papers] aren’t burnt, but some of them I just felt like I had to burn them, I had to get rid of that rectangular edge, that hard edge, and I needed to let it go someplace else. At least, that was my process,” Lee Warren explained.

It is part of the process of “stressing the paper,” which Lee Warren has been doing for years.

She told the crowd about a time when a fellow art student commented on her technique after observing her “having a fight with the paper” from afar.

The contrast of the paper and images on them were what interested Christa Wilkinson, an undecided major.

“It almost, to me, feels like there’s two different painters in one. Because the background doesn’t necessarily match with the front,” Wilkinson said. “Like it seems like she’s taking things and putting them in different situations which I really like. Especially with the mixing of her mediums.”

Lee Warren’s mediums include graphite, ink, watercolor and acrylic paint — any material that is water soluble, “except water soluble oils.”

Gallery director Patricia Woods thought “Piece$” would be a beneficial exhibition for students, in part due to these unique techniques.

“I want [students] to see that when you start to really find your voice as an artist, you really start doing different things, like the burnt edges,” Woods said. “That’s so important, distressed paper, and that’s not something we do in beginning drawing (courses).”

Woods couldn’t choose a favorite single piece, but instead gestured towards a whole wall of paintings.

“If I had a ton of money, I’d probably buy half the show. I love the work,” she said. “I like the old frames too, I think that’s really important … because the old kind of stressed frames is also kind of key to the … weathered look that her work takes on.”

In addition to her personal work, Lee Warren is an art professor and helps run the art gallery at Laney College in Oakland. This made her a perfect fit for the Kaneko, so Woods contacted her over a year ago.

“It’s great … if we can find a great artist that’s also a teacher,” Woods said. “They work with students and they understand what the students need to get from the show.”

Lee Warren stressed that her work is constantly evolving, and she is always looking to start the next project. This is how art stays fun for her, and she told students that they should do the same.

“I’ve been making art for such a long time, and so for me the inspiration comes from never being satisfied with what I’ve made,” the artist said. “One of the things I always tell my students is don’t fall in love with their work, because if you fall in love with [your] work you’ll never do anything again.”