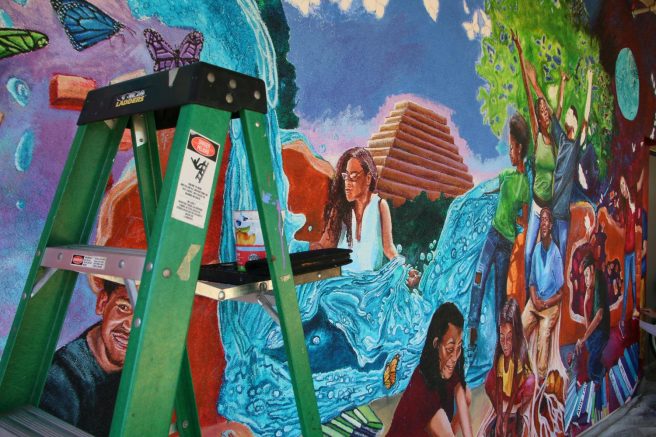 A mural being painted outside of the Learning Resource Center features the likeness of students and symbols that represent Sacramento and American River College on Sept. 1 2018. (Photo by Jennah Booth)

Tucked into a fenced-off corner of the campus, a representation of student life at American River College and Sacramento is slowly accumulating just outside of the Learning Resource Center.

That representation is a mural that is a culmination of student and community input and is the brainchild of muralist Ruby Chacon and James Kaneko Gallery director Patricia Wood.

Chacon is a Chicana artist from Salt Lake City, Utah who is currently working to get her teaching credentials from Sacramento State University. Her goal is to teach collaborative community art to high school students.

“I love working with teens so I wanted to do it with a school that would be supportive of that, where you do participatory research with the students that would inform the design,” she said. “That way they would get to know their communities and they come up creatively with the images that would validate those communities.”

Chacon was brought to ARC by Wood in January, when her art was displayed in the James Kaneko Gallery. The show, “In the Spirit of Itzpapalotl, Venceremos,” was a collaboration between Chacon and photographer Flor Olivo.

“I prefer collaboration, just because I feel like we’ve been taught to do art as more of an individual,” Chacon said. “The way I like to do art is more communal and collective because I think you learn more; you’re more creative.”

Chacon brought this collaborative spirit to the organization of the project. Plans for the mural began in the spring of 2018, when Chacon and Wood held a focus group with approximately 10 ARC students in order to carve out the foundational ideas for the mural.

“We tried to invite pretty much everybody. … We went through the various different clubs, faculty, advisers for clubs; anyone we thought was connected to different groups of students,” Wood said. “It was kind of our brainstorming session.”

Chacon and Wood provided the students with brainstorming questions and collaborated on different images and concepts on butcher paper, “and then with that information we put together a survey and we sent it out to the at-large community,” Chacon said.

Wood facilitated the distribution of the survey to the public, which went out several times in order to reach as many people across the Los Rios Community College District as possible.

In addition to the concepts provided by the brainstorming workshop, the survey also had a section for people to write in their own ideas, many of which were included in the final design of the mural. It also allowed students to volunteer to participate further in the project.

“We analyzed the information, did other workshops, met with students to go over the survey,” Chacon said. “And then those following workshops we had students, who were informed with the survey, bring ideas, either through images or just through discussion on what the design could look like.”

Getting ARC’s and Los Rios community’s input was an important part of the process for Chacon. She said she felt it allowed the art to represent more than just her own interpretation of a community.

“I think muralism has a lot of power to tell the counter-narrative to stereotypes and what is told about marginalized communities or whatever communities that feel like they’re not part of the power structure,” she said.

Many of the images that came from the survey were included in the mural in a more interpretive, rather than literal, way. During one of the workshops, Chacon asked participants to pose and embody different concepts physically. Students were photographed shaping their bodies into the form of an oak tree or kneeling to paint flowers and those photographs were incorporated into the design.

Symbols that hit closer to home for ARC students included: rainbow butterflies to represent the Pride Center, hands spelling out “Make peace prevail on Earth” in American Sign Language, and images of students and people involved with the Los Rios community. 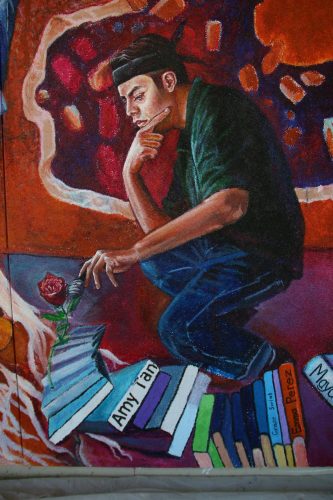 A mural being painted outside of the Learning Resouce Center features the likeness of students and symbols that represent Sacramento and American River College on Sept. 1 2018. (Photo by Jennah Booth)

“I couldn’t have come up with putting that design together without all of the converging ideas from all of the other artists involved,” Chacon said. “You need that in order to really gain a whole picture of a community, otherwise it’s just my interpretation which isn’t going to be as authentic.”

Armed with all of these images, photographs and concepts, Chacon collaged everything and came up with the final design, which according to Wood, then had to be approved by “the powers that be.”

Chacon and Wood met with Kuldeep Kaur, the Vice President of Administrative Services, and along with a handful of students, presented the design to the rest of the president’s staff. In order to speed the process up, the mural team made a video to help present their case for approval.

The mural was approved July 24, and painting began the following week. Josh Bonzo, a filmmaking major and volunteer for ARC’s Universal Engaging Inclusive Transformative Education (UNITE) programs, has worked with the mural team since the beginning of the painting process.

In addition to painting a small portion of the mural, Bonzo filmed the mural process in order to make a montage to be shared on UNITE social media pages.

“My idea was to do a time-lapse of the mural, so at the end of the day, when it’s all done there will be a quick little montage of how it all started from the beginning,” Bonzo said.

Guided by Chacon, over 25 volunteers helped paint the mural throughout the summer and into the new school year. According to Wood, anyone who was interested could come out and paint, regardless of experience or age.

“One day we had so many students out here working on it, Ruby and I didn’t really have a spot to work,” Wood said. “I think we had a week or two where we were here almost every day and I actually started having dreams about mixing paints the wrong colors. … I wouldn’t say I was sick of it but it was kind of all-consuming.”

Now, well into the fall semester, the mural is half finished and progress has slowed.

“To a lot of people it seems almost finished, but you see some of the detailed areas, like some of the portraits. … It all needs to be built up to the same amount of detail. So there isn’t one part that’s complete,” Wood said.

Chacon and Wood meet on Sundays to work on the painting, welcoming any volunteer that can make it out. For Chacon, nearing the finish of the mural painting will be bittersweet.

“I can’t wait until it’s done so we can see the finished product, but then at the same time this is also like a community building thing … so it’s also going to be sad,” Chacon said. “That’s what I love using murals for and that’s why it’s important to collaborate because you’re not going to have everyone’s experience. … So those ideas, when they intersect, can be very beautiful.”

Be the first to comment on "A campus connected; muralist draws Los Rios together"