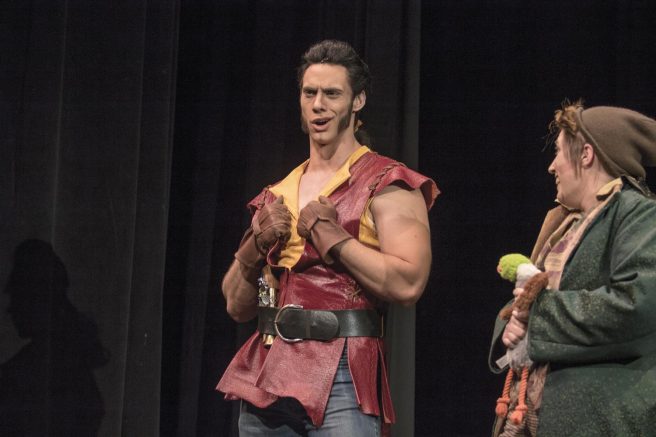 Chris Sharpe (left) stands on stage with Jareth Ryford during a rehearsal for American River College's production of "Beauty and the Beast" on Oct. 4. (Photo by Ashley Hayes-Stone)

The former high school offensive lineman has a slow but determined gait as he walks through the hallways of American River College.

Chris Sharpe, the 6-foot-3-inch, 220 pound mountain of a man has spent the last few months training. Training harder than he ever did during his time as a varsity football star. He’s put on 15 pounds of muscle in the past two months and plans to put on more.

He is making his way towards the northwest corner of campus; the Fine and Applied Arts building is his destination. He meticulously runs his fingers through his beard as he slowly lumbers across the school grounds.

Sharpe’s headphones are turned up loud, he is blasting heavy metal. He has just finished watching “Pumping Iron,” for what must be the tenth time this week, a documentary about former bodybuilder and Mr. Olympia, Arnold Schwarzenegger.

He’s spent a lot of his recent free time reading men’s rights forums, entrenching himself in the ideologies of the far right and libertarian movements. As he walks, he silently preaches these ideologies to himself.

Sharpe doesn’t actually believe in any of the “nonsense” he’s reciting. He’s not even a particularly big fan of heavy metal. 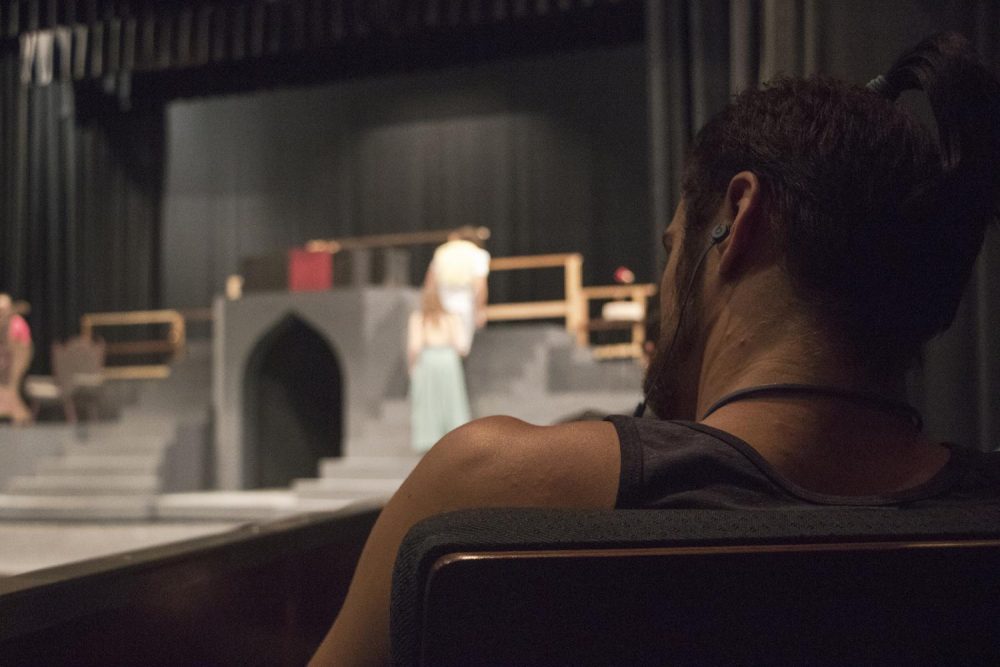 Chris Sharpe watches the stage during a rehearsal for “Beauty and the Beast” while he listens to music to get into the mindset of Gaston. Sharpe likes to remove himself from his cast members in order to maintain character. (Photo by Luis Gael Jimenez)

Sharpe transformation into a meat mountain misogynist has been a purposeful one. Sharpe is preparing himself to play the role of Gaston in ARC’s production of “Beauty and the Beast,” a role that he describes as, “the role of a lifetime.”

Sharpe’s looks like Gaston in body and in mind, but yet for those that talk to him, Sharpe could not differ any more in substance of spirit.

Even Sharpe’s mother, Julia Sharpe, thinks her son isn’t naturally suited for the role of the womanizing Gaston.

“Chris could not be any more different than Gaston,” Julia Sharpe said. “He’s such a good kid.”

While ever supportive of her son’s acting endeavors, Julia Sharpe admits she never foresaw the stage in her son’s future.

“Even as a kid, we never really took him to the theater. We watched movies as a family, but I don’t remember him particularly wanting to be an actor,” Julia Sharpe said.

In fact, Chris Sharpe always wanted to be an actor, he just didn’t want to admit it to his parents.

“I remember reciting lines from the movies I saw as a little kid,” Sharpe said. “My whole family are blue collar workers, so I was raised with these old world values of getting a job at a factory or joining the military like my father. But I never saw myself working that nine to five like everyone else in my family. The goal for me is to make it as an actor, not to get some office job.”

“My whole family are blue collar workers, so I was raised with these old world values of getting a job at a factory or joining the military like my father. But I never saw myself working that nine to five like everyone else in my family. The goal for me is to make it as an actor, not to get some office job.” -Chris Sharpe

And Chris Sharpe held off on those acting dreams for a long time. In high school, he occupied himself with football and was a member of the award-winning Natomas High School Drum Corp. He kept to himself and stayed away from the theater.

He didn’t try his hand at acting until he was enrolled at Sacramento City College and auditioned for a children’s theater production “just to see if I could do it,” according to Sharpe.

After succeeding in that, he was part of the ensemble cast for SCC’s take on “The Great Gatsby.”

Even in the background, as a member of the ensemble, Sharpe found attention.

“I would have people coming up to me after the show telling me that ‘I stole the show,’” Sharpe said. “I really didn’t like it. It made me feel like I had done something wrong. I don’t want to be in the spotlight.” 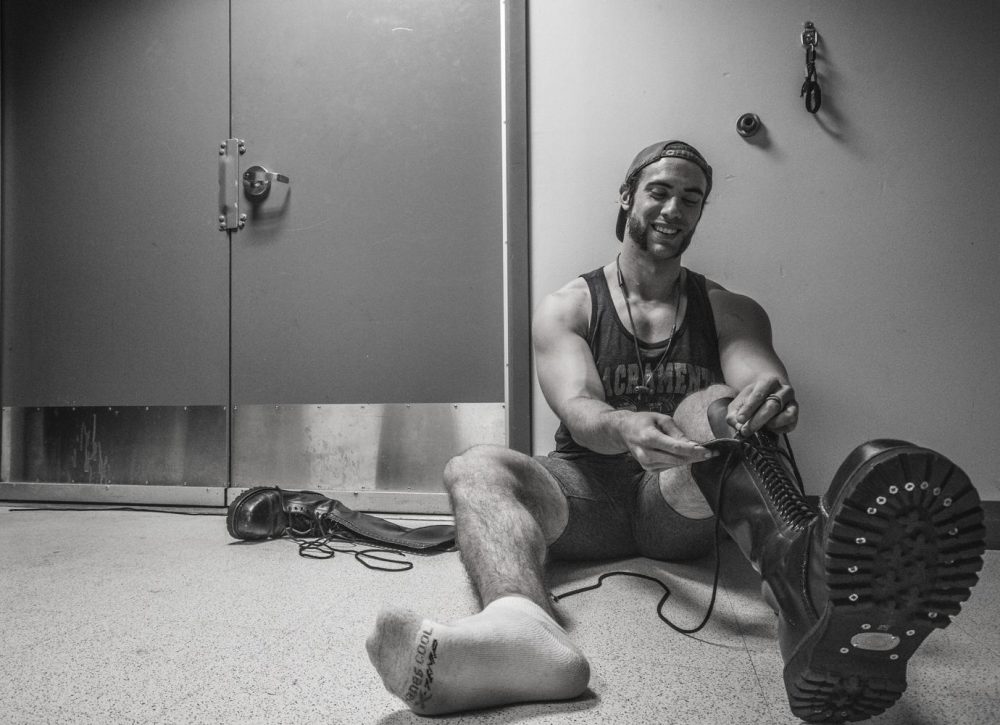 Chris Sharpe ties his boots in preparation for a rehearsal for the American River College production of “Beauty and the Beast” on Sept. 28. It takes Sharpe anywhere from 15 to 30 minutes to lace the boots up depending on whether or not he has help. (Photo by Luis Gael Jimenez)

Sharpe admits that as an actor, it is near-impossible to avoid the spotlight. When asked if he wanted to be a movie star, Sharpe responded negatively.

“I’m not looking for that. My dream is to be able to act for a living, not to be rich and famous or anything like that,” Sharpe said.

Sharpe has starred in several short films and local commercials since that original background role in “The Great Gatsby.” He has also worked on developing himself as an actor, and that’s what brought Sharpe to ARC, where he is currently in his third semester.

“There’s no other program like it. It’s the best in the area,” Sharpe said of the ARC Theatre Program.

It’s here at ARC, that Sharpe was able to cultivate these talents into a lead role in “Beauty and the Beast.”

“Basically my day right now is wake up, eat, work out, go to school, go to work, come home, eat and then leave for rehearsal,” Sharpe said. “I barely even see my parents anymore because when I’m home I’m only here to eat or do character research.

Sharpe has taken that character research with him everywhere he goes in the form of a notebook he carries around filled with sketches, quotes and pictures of famous men that Sharpe feels embody Gaston-esque characteristics like Ron Swanson from the television show “Parks and Recreation.”

“I would have people coming up to me after the show telling me that ‘I stole the show.’ I really didn’t like it. It made me feel like I had done something wrong. I don’t want to be in the spotlight.” -Chris Sharpe

He has spent months teaching himself to think and act like Gaston, and while Sharpe says he can’t wait to go back to his regular life, he thinks the role will leave a lasting impression on him.

“I don’t think it will be hard to go back to normal. I don’t really believe any of the stuff I’m reading,” Sharpe said. “I think the role has given me more confidence though. It’s taught me to be more assertive and I think that it will last even after the run [of “Beauty and the Beast”] is over.”

Below is a YouTube clip of the commercial Sharpe starred in for the Hoblit Truck Center.