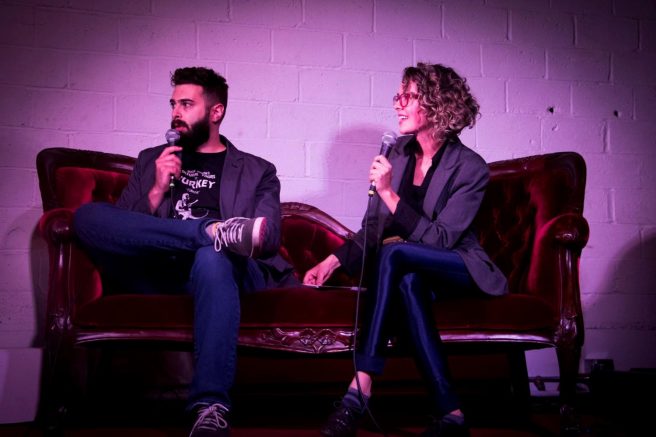 Mike Cella and Shahera Hyatt host the "Latest Show at the Red Museum in Sacramento on Sept. 21. (Photo by Ashley Hayes-Stone)

Sacramento is home to its own late night talk show.

The Latest Night Show is a monthly live variety show which features local musicians, comedians and other people of note.

The show originally began as the brainchild of comedian Mike Cella who had the idea of running a one-man talk show out of the Comedy Spot, a local comedy venue.

“I started doing the show because I would always do tweets of topical jokes and then I would only be able to do them on stage for about a week or even a day before they would be old,” Cella said. “The show was a way for me to have an outlet so I could do those jokes live.”

Shahera Hyatt, the current co-host and an ARC alumna, was actually the first guest on Cella’s inaugural talk show..

“Mike did the original show at the Comedy Spot. It wasn’t our show but he had me on it [as a guest],” Hyatt said. “I started researching late night and thinking to myself, ‘damn, I want to do my own nighttime talk show.’ It wasn’t until about five months later that we sat down and talked about doing it together.”

“We’re creating moments by inviting the people doing dope shit in Sac, to come in and have fun doing it with us.” -Mike Cella

The duo were approached with an offer from the people that run the Red Museum. They had been in attendance that opening night and offered to let Cella and Hyatt use their venue as a permanent home for the show.

Now with an idea and a venue, Hyatt and Cella were able to recruit musicians Drew Walker and Damien Verrett to serve as the house band: The Late Night Dorkestra. 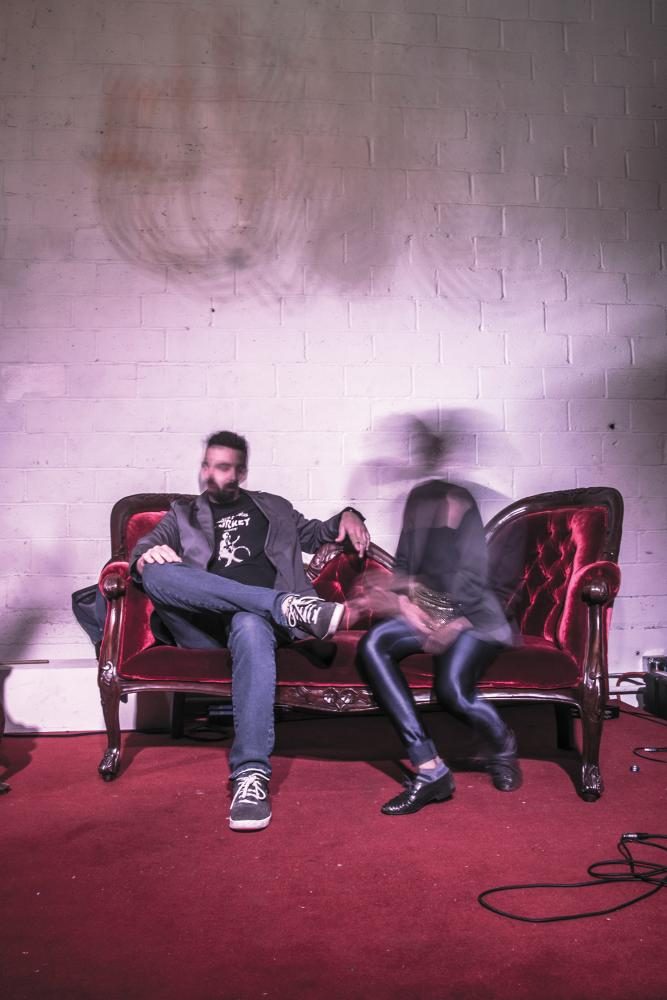 Mike Cella (left) and Shahera Hyatt host the “Latest Night Show” on Sept. 21 inside the Red Museum in Sacramento, California. The show is based off of late night television shows like the “Tonight Show” and “Late Night.” (Photo illustration by Luis Gael Jimenez)

The group then picked a monthly format and a 90-minute runtime in order to ensure the quality of every show.

“It’s essentially a 90-minute original show. It really does take the month to prepare and write topical jokes. We also, really aim high in terms of the talent that we get for the music and the guests,” Hyatt said.

The shows are announced on Facebook weeks beforehand and typically draw an audience that fills the Red Museum to the brim.

What’s happened between the first official Latest Night Show back in May to its most recent show on Sept. 21, has been quite noteworthy.

From having world class butchers come in and prepare a lamb carcass onstage in preparation for an international contest, to having gender studies experts come in and analyzing President Donald Trump’s transgender military ban, the pair have created a lot of conversation within the city.

“We’re creating moments by inviting the people doing dope shit in Sac, to come in and have fun doing it with us,” Cella said.