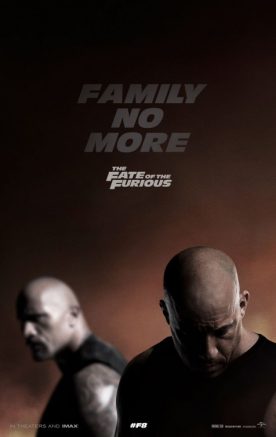 "The Fate of the Furious" broke records at the box office with a $532 million opening weekend. This puts it ahead of the previous record holder, "Star Wars The Force Awakens" by $3 million. (Photo courtesy of Universal Studios)

The “Fast and Furious” is an old franchise at this point. With the first film coming out in 2001, the franchise is fast approaching being 20 years old.

In order to survive in an age where bombastic space films and superhero films bring in all the dough, the “Fast and the Furious” has adapted a new formula.

If you haven’t been following the series, they’ve evolved from car racing crime-dramas to an explosion of action, engines, and men yelling because they can’t cope with their emotions.

Now a remnant of what the series started out as, “The Fate of the Furious” is now almost a parody of itself with a crew of street racers teaming up with dangerous criminals, and CIA spoofs to save the world. This isn’t a bad thing.

“The Fate of the Furious” thrives in the ridiculous. The film is very self aware, and because of this it’s easy to go along for the ride and enjoy it. Many of the set pieces are filled with comedic moments that heightened the experience. Without these, the film would not have been as good as it was.

Living up to its franchise name, the movie rarely slows down, and most characters seem filled with angst throughout. The time that the film does slow down, and explains to you why everything is going on, is when the film is at its lowest.

That’s mostly because the characters never seem like real people, so it’s hard to really feel the emotional impact of the film, especially when some tragic events that happen are never explained to other characters in the film, and the characters keep on trucking like all is right as rain.

These scenes in the film could have just been done so much better with less yelling. The franchise had a long time to flesh out some of these characters, yet they’re still so two-dimensional it’s unbelievable.

The cast does a good job for most of the film. Charlize Theron is probably the best villain that they have had in the series, and Tyrese Gibson provides a lot of laughs throughout the film. This is the first “Fast and Furious” film to not have Paul Walker star, as he died in tragic car accident in 2013, but film stands ground without him.

Opinion: Technology is driving us into danger

Be the first to comment on "“Fate of the Furious,” a fast film with great set pieces and little emotion."