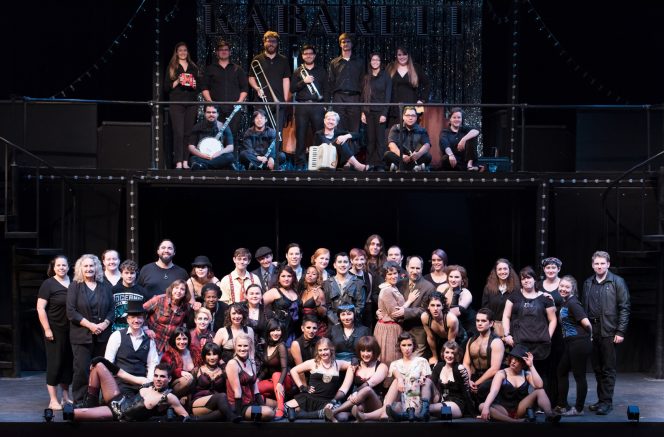 The American River College theater production department returns from their trip in Denver that took place in February. (Photo curtesy of theater department)

The American River College theater production department, which included the cast and crew for the show “Cabaret Gala,” returned from its trip to the top regional Kennedy Center American College Theater Festival in Denver that took place in February.

The ARC theater production — including those involved in the show “Cabaret Gala” and other student competitors, actors, choreographers and directors — experienced a rough but exciting five days.

“Cabaret Gala” is a condensed version of their earlier show “Cabaret” performed last semester, which was converted into a traveling play especially for the festival.

During the course of the trip, the group participated in different competitions, workshops, seminars, auditions and performed its show.

Every year, the theater production and students are involved in presenting and putting together shows, scenes, performances and musical pieces at ARC, although this was the first time in nearly 30 years that a theater production was given the opportunity to attend the ACTF.

The festival, however, ended with a different outcome than participants expected. In the past, national judges at the festival have selected one show production to compete nationally in Washington D.C.

Unlike in previous years, however, no finalist was selected among the show productions, much to the disappointment of many participants.

Itzin Alpizar, a faux orchestra performer in the show “Cabaret Gala” expressed confusion over this; she explained that for different reasons, the festival organizers said they were not able to afford selecting a winner.

Tracy Shearer, vocal director for Cabaret and professor at ARC, explained that a finalist wasn’t selected for the national competition due to the current political climate jeopardizing the arts and science funding.

“[The national judges] said that the show was appropriate to the political climate and felt we did a great job moving from the chaos of setting the things up to a show that was very well handled,” Shearer said.

Although there wasn’t a production show selected to go to the national festival, other competitions did allow winners to be selected to perform nationally and win other awards.

In addition to performing the show “Cabaret,” the ARC theater production participated in a number of different activities, competitions, seminars, and observed academic and professional theater productions, according to Shearer.

ARC performer and singer Jazz Supatchaya Sunpanich, who presented musical pieces and performed in “Cabaret Gala,” won in the competition for the Open Jar Institute, which gave her the opportunity to take part in a special one week workshop and work one-on-one with casting directors, choreographers, agents and actors from Broadway.

Sunpanich said her dream is to be on the Broadway — a dream that led her to move to America three years ago to find the opportunity to make it come true.

“I’m going to go to New York for this program at the end of July, and will work with Broadway people and get closer to my dream,” Sunpanich said.

ARC actors Elio Gutierrez and Carmel Suchard were also selected to perform among eight other actors in 10-minute play competitions; these plays were premiered at the festival, and required Gutierrez and Suchard to become familiarized with the play, memorize their part, and perform it that day.

“One of the plays was selected to compete at the national competition,” said Shearer. “It’s a huge honor!”

Another competition, the Tech Olympics and Tech Expo nominated students, designs and artisans to bring a display and portfolio of their work. Competing in this competition was Kimberleey Wilson, who brought her make-up design for the ARC production of “The Tempest.”

Wilson won the regional competition in Allied Arts for make-up design and was selected to attend the national competition at the United States Institute for Theater Technology in Missouri, for which she left five days after returning from Denver. Her trip expense, including the lodging, registration and other expenses, were all paid for.

By Wednesday, their third day there, the production “Cabaret Gala” finally presented its show.

That day, all the actors, tech staff, choreographers, directors, and stage staff arrived at 6 p.m. in the morning to prepare and build the show set.
Shearer recounted the details of the day, describing how the whole set took a total of eight hours to build. Then they proceeded to perform their show twice that day, with only 45 minutes to take a break.
Overall, Shearer reported that this trip proved to be “among the hardest work the students have ever done.”

Be the first to comment on "Theater Production performed in Colorado!"