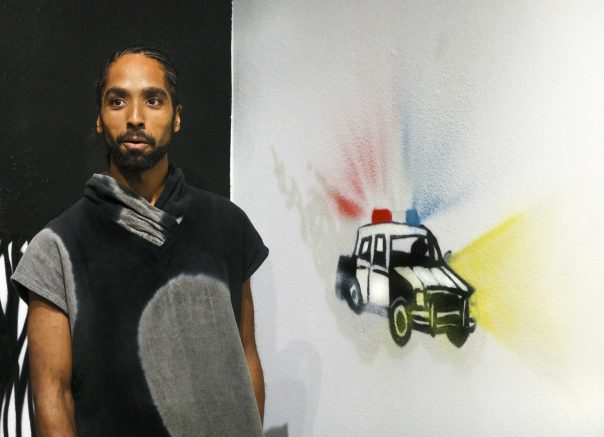 Artist Unity Lewis shares the meaning behind his murals in the Kaneko Gallery at American River College on Oct. 1, 2016. (Photo by Luis Gael Jimenez)

ARC students are invited to take part in a mural project hosted by Universal Engaging Inclusive Transformation Education (UNITE), the Community and Diversity Center at American River College. The project, led by artist and instructor Unity Lewis, will be completed throughout the next couple of weeks.

Students across campus, including art and gallery directing students, and UNITE members, were present for the first meeting where the details for the workshop and the mural project were discussed.

In this workshop, students will come together once a week to create a group mural for UNITE, which will then be placed on a wall in the HUB located in the Student Center.

Although the times of the workshop are currently being decided, Unity Lewis and UNITE member Roderic Agbunag have agreed to have it take place each Friday.

A “call for artists” was held on Feb. 9-10 in the Student Center for those interested in contributing and taking part of the mural project.

The mural’s creation is intended to be a creative representation of the cultural diversity of the student body, according to Lewis.

It opens up the opportunity for the students to learn about the all-inclusive hip-hop language and artistic expression, Lewis added.

“We want to learn from each other’s cultures,” Lewis said during the group’s first meeting.

The students will be trained to use methods such as aerosol art to develop their concept for the production.

The creation of the mural project will take place throughout a series of workshops throughout this semester, extending to 10 weeks.

Lewis will take students through different methods of hip-hop culture to come up with the idea for the mural they will create. By week five, the group will work on developing its concept and putting together the final idea for the mural.

During the first couple of weeks, students will delve into the background of mural work and the history and influence of the craft.

They will gain insight into the nature of the hip-hop culture and it’s elements, based on the workshop syllabus, and break down the “funk alphabet” from a tag to a piece to create their own individual mark.

This tag will be their own mark, using their name or a word they want to adopt as their writing name, based on the workshop syllabus.

They will address hip-hop as a “temporary autonomous zone” in its formative years, “before it became mainstream,” Lewis explained.

For more information about the mural project and when their next meeting will take place, visit the HUB located in the student center.

Student journalists are not the enemy