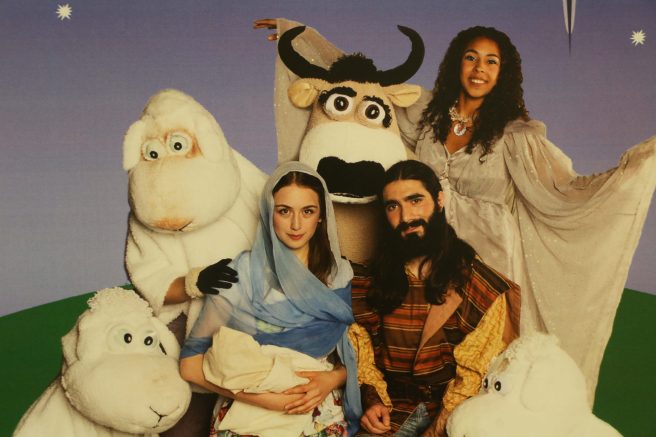 The Shepherd’s Play is taking on a modern musical adaptation of the medieval mystery play, from Nov. 18 - Dec. 4. (Photo by Lidiya Grib)

“The Shepherds’ Play” brings the ancient medieval world to life through humor, music and dancing to American River College this Friday.

The play is based on a classic and famous Medieval mystery play from historical manuscripts that dates from the fifteenth century, the Secunda Pastorum of the Wakefield Cycle.

This humorous play is about a trio of shepherds searching for their stolen sheep and dealing with their difficult life, leading to the spiritual story of their miraculous visitation of the Christ Child’s birth.

There are many surprises intertwined within the story plot, including visits from an Angel and the shepherds’ attempts to avoid the Grim Reaper.

Tap and pole dancing is also included in the play as part of the modern take on the play.

“The Shepherds’ Play” is a combination of excerpts from three medieval plays, “Nativity”, “Everyman” and “The Second Shepherd’s Play.”

The inclusion of scenes from these the three plays makes the play more “majestic and pageantry,” as described by director Sam Williams.

In the play “Everyman”, the character Everyman represents every person as he tries to escape from the character Death, the Grim Reaper.

“Everyman is trying to escape death because the wages of sin is death; if you sin, you die, but through salvation in Jesus every man is saved,” said Williams.

The play portrays the “daily grind of life,” and it is set during cold and winter times as the characters struggled to survive.

William’s explained that the medieval writers are relatable to us because they are lower class poor people, who are overtaxed and oppressed.

“They took where they were and wrote of those times so people can actually understand the Bible,” Williams said.

“People may not know, but the writers wrote it as a mixture of farce, broad humor that allowed people to understand and relate to something that’s funny.”

Williams described the craziness of the play, ranging from the pageantry to Mary and Joseph who “are surrounded by a bunch of goofballs.”

“The characters are not all beautiful and perfect, just like none of us are perfect” he said.

Williams is also performing in the play the character of a “crass shepard” who always wants to fight.

Williams had to step in to play a major role of a shepherd after many students dropped out for different reasons.

Williams and the other actors are using their last three days of practice, fervently getting ready with last minute technical adjustments and costumes.

“The Shepherds’ Play” will be performed from Nov. 18 – Dec. 4 at ARC in Stage 2 at north end of Theatre building.

More information about the play can be found online at ARCTheatre.org or by visiting the Arts and Science main office.