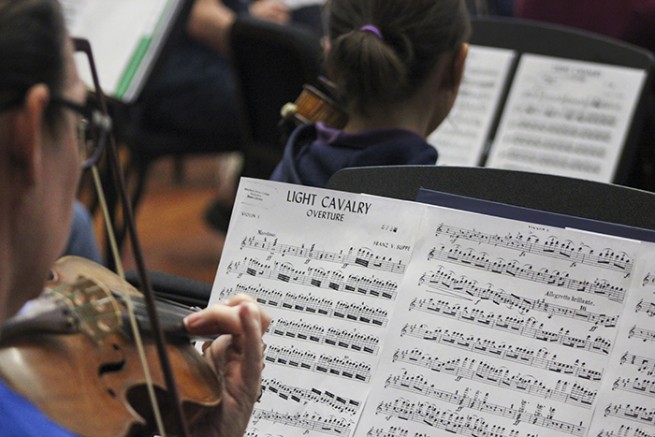 The sheet music for "Light Cavalry Overture" by Franz von Suppe is seen over the shoulder of a violin player from the American River College Orchestra at their March 30 practice. The orchestra recently welcomed four primary school musicians to their practice. (Photo by Hannah Darden)

As they hit the accelerando, the violin section moved their bows quickly, concentration etched on their faces. The violins outnumbered the rest of the sections, in part thanks to the four middle and high school musicians who joined the American River College orchestra for the March 30 orchestra practice.

The musicians were introduced to the orchestra by Timea Pedersen, MacKaela’s mother and Sacramento Waldorf School violin teacher.

Timea said the experience was great for the students, who have all been playing their instruments for several years to achieve the caliber of the ARC Orchestra players.

Jaycox said she “likes the mix” of working with professionals, college students and her fellow primary school students.

Orchestra director Steven Thompson said the orchestra loved having the students play with them.

“A lot of the other players are saying, ‘oh, the string section sounded great!’, and that’s thanks to the kids,” said Thompson. “I hope they come back, go to ARC in the future.”

The orchestra is an open project, which allows anyone who plays an orchestral instrument to join them.

“We are an orchestra for all,” said Thompson.

The orchestral practice began with Franz von Suppe’s “Light Cavalry Overture” before transitioning to selections from the score of the Star Wars movies.

The orchestra’s next concert falls on May 4, or “Star Wars Day,” and will feature the famous title score as well as other songs from the score.

The concert will also feature Tchaikovsky’s piano concerto #1 and other concert overtures.

Be the first to comment on "ARC orchestra welcomes young students"