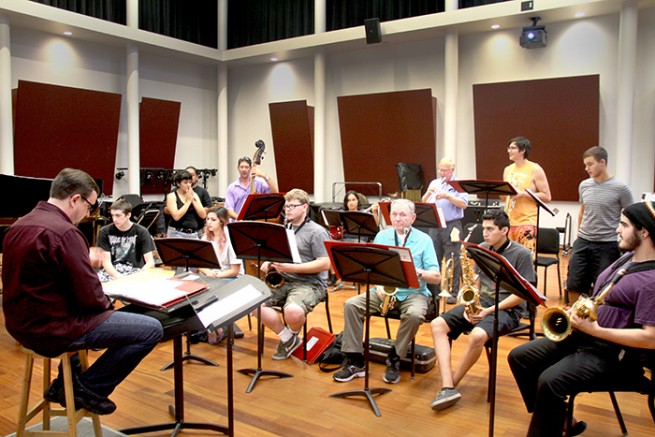 Professor Dyne Eifertsen teaches the Latin jazz ensemble at ARC. The ensemble is performing with the studio jazz ensemble on Thursday night. (Photo by Matthew Wilke)

The Latin jazz ensemble will be performing with the studio jazz ensemble on Thursday at 7:30 p.m. that would  include songs such as “Salsa Vibes” by Louie Ramirez,” “Linda Chicana,” “Afro Blue” and “Mambo Inn.”

Latin jazz is a style of music compared to more traditional music styles in that many of the rhythmic interpretations that can be described as complex with many layers, yet very straightforward and relatively simple.

Jazz studies major Ryan Knowles, the pianist for the group, said that “you hear the rhythm section playing very complex Latin rhythms, with jazz voicings on top of that, creating a really cool combination of both Latin and jazz.”

The group itself is comprised of a woodwind section, mostly saxophone, a brass section with trumpets, trombones, and a tuba, and a rhythm section of a piano, hand drums and cowbells.

Despite the relatively smaller wind section, with Latin jazz there is a much heavier emphasis on the rhythm section when compared to more traditional music styles, where percussion is more often the compliment rather than the focus of a group.

Christian Rico, the guitar player for the ensemble, comes from a metal music background.

After a semester with the group, Rico said that he appreciates learning how to play in a different performing environment.

“It’s not much harder, it’s more so that it’s a much different style coming from shredding and power chords, to playing something really specifically for a large group,” Rico said.

When the performers rehearsed, the group was dancing and smiling as they played with each other.

“It feels like a family; it’s a smaller group, yet when everyone plays it sounds like a larger ensemble,” said percussionist Nick Stinson.

Prices are $8 general, $5 for students and free parking is available in parking lot D.

Chalk It Up draws large crowd