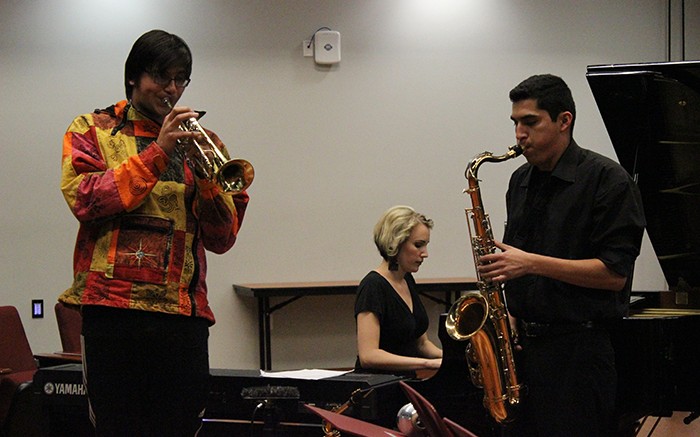 From left to right, Noah Flores, Lahre Shiflet and Daniel Bravo are a part of the group 547. The ensemble performed in a concert at the Jazz Combos Showcase American River College on Nov. 6. (Photo by Michael Pacheco)

The group played “Corcovado” by Antonio Carlos Jobim, “Yes and No” by Wayne Shorter and “Someday My Prince Will Come” by Larry Morey and Frank Churchill.

The Jazz Collective was one of four groups to perform, which also included Silver Tones, Descarga Tropical and 547.

Jazz Collective vocalist Katya Novskaya said that she had a small amount of “stage fright.”

“I did everything I was planning on doing, except I wish I was less nervous, and breathing deeper,” Novskaya said. “I think everybody was a little nervous, but we did great overall.”

Silver Tones was the second group to perform. The group played “Duke’s Place” by Duke Ellington and “Cantaloupe Island” by Herbie Hancock.

The next group, Descarga Tropical, was a Latin-style group, which performed a unique interpretation of Sade Adu’s “Smooth Operator” and Tito Puente’s “Picadillo.”

Descarga wrapped up their set up with a Latin spin on the Jazz standard “All of Me” by Gerald Marks and Seymour Simons.

Ryan Knowles, the pianist for Descarga Tropical, explained why it was difficult to perform Latin-style music compared with other genres.

“It’s more about rhythm keeping,” Knowles said. “It’s a percussion and chordal instrument, so you have to be on top of your rhythms.”

The next act was the group 547, which was named after the main practice room.

After the concert, Gilman commented that the concert went very well, and was a great learning experience, especially for the newer members who are in the groups.

“As each of the groups get to know each other, listen more, and learn more about the Jazz idiom and how to play it, they will become more comfortable and grow both as individuals and ensembles,” Gilman said.