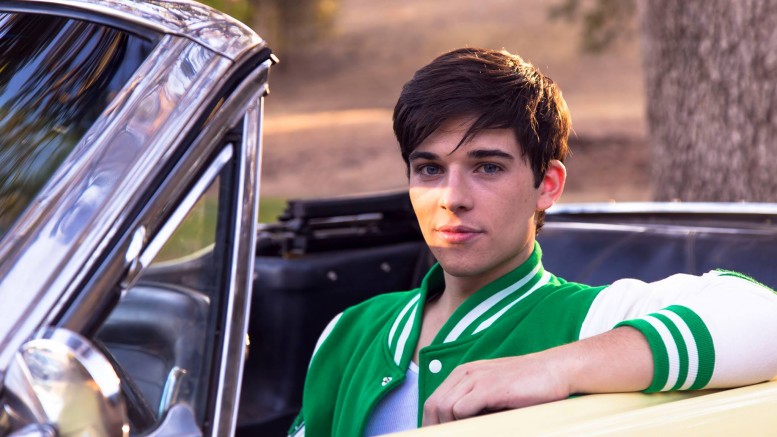 Sean O’Donnell sits in a convertible mustang while on set of “Mamaboy.” O’Donnell plays the role of a male high school student who becomes the first successful human experiment that causes him to be able to become pregnant. (Photo courtesy of My Hero Productions)

By Jose Garcia and Nicholas Corey

A previous version of this story falsely reported that the photo used was courtesy of Jonathan Morken. In fact, it was provided by My Hero Productions.

A previous version of this story falsely reported that Cassidy Shaffer said that Miley Cyrus and Salena Gomez “have gone on to be successful, but at a price.” In fact, this is a paraphrase.

“Mamaboy,” an upcoming comedy film that features a male high school student who becomes pregnant, is being shot in Sacramento and features local talent.

“Mamaboy” is being shot over the greater Sacramento area in locations such as Placerville, Shingle Springs, Cameron Park and Rocklin. Aaron Leong, the director, and Rick Kuebler, the producer and writer, are both from Sacramento.

Jonathan Morken, the president of Apprehensive Films, is an American River College alum who ran the media day for “Mamaboy” on Oct. 9.

Prior to “Mamaboy,” three of the actors – DeBerry, Snyder and Shaffer – knew each other from eating lunch together between working on their Disney Channel shows.

Post-Disney Channel actresses like Miley Cyrus and Selena Gomez have gone on to be successful, but at a price.

“It’s all about personal choice,” said Shaffer. “(She believes) that a corporation should not be judged off of one person.”

Snyder concurred with Shaffer’s notion of a post-Disney Channel career.

“I’m not trying to be a media hog,” said Snyder.

Snyder understands the skepticism that has occurred with the Disney label. At times it’s unwarranted, but he looks to defy the odds each time during audition.

Hankins becomes the first successful human subject in an experiment aimed at allowing men to become pregnant and suffers through the social anxiety of being the only boy in his school who sports a baby bump.

O’Donnell said he called his mother when he received the main role for “Mamaboy” and that she gave him her insight of what it was like to be pregnant.

Gary Busey plays Kelly’s baseball coach who forces him to quit because of his unusual circumstances.

O’Donnell said that Busey was “supportive” and that he insisted on hearing a 50-word speech he had performed a scene prior to the one they were in together in order to observe his character.

O’Donnell attended all four years of high school at a public school, which he said made the daily trials and tribulations Kelly had to face more relatable.

O’Donnell wanted to pay homage to the actual sacrifice childbirth brings. It started physically, with the prosthetic baby bump being most crucial to his performance.

Kuebler came up with the script for “Mamaboy” in 1988.

“Twenty-seven years: if it will be a success, it will have been a long time coming,” said Kuebler.

Leong and Kuebler are both a part of the Capital Film Arts Alliance (CFAA), a Sacramento-based group that focuses on networking with film and media professionals.

Snyder has acted in television for most of his career, including appearances on the Disney Channel’s “Kickin’ It” and ABC’s “Modern Family.”

Snyder prefers the format of film as opposed to the static schedule that comes with working on television.

Unlike Snyder, Shaffer, who played Kimmy on Disney Channel’s “Austin & Ally,” reminisced about the quick pace that comes with television.

That feeling, she said, stems from her time as a performer for the Rocklin Community Theatre.

Shaffer had focused her career mostly on acting, although she has missed the thrill of performing live on stage. The acclimation of pace was her biggest adjustment when coming into the film.

Unlike Snyder and Shaffer, Reid played the role of Sinjin on the popular Nickelodeon show “Victorious” and has acted in numerous movies.

At the age of 10, he appeared on shows such as “Saturday Night Live,” “Last Call with Carson Daly” and “Late Night with David Letterman” as numerous characters in sketches.

“I’m excited to be working on this film,” said Reid. “It’s up my alley since I’m more of a comedic actor. Working with Aaron Leong has been amazing, he’s like a pro. I had to double check to see if he was a first time director.”