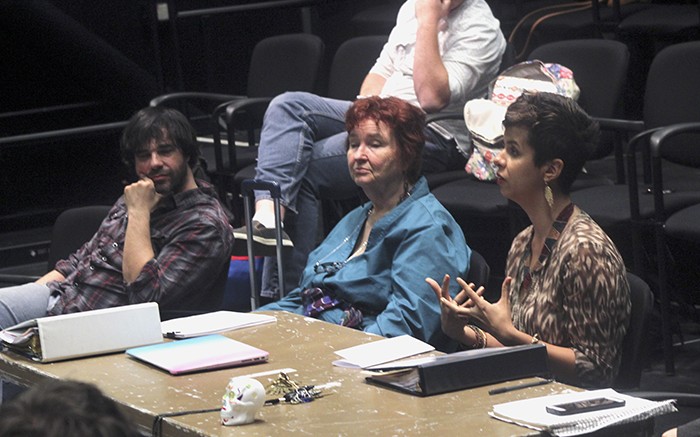 Delondra Williams, right, answers questions from the cast of "Skeleton Stories," a upcoming American River College production. Pamela Downs, center, will be the second person to bring the play to the stage in its history. (Photo by Joseph Daniels)

The playwright for the upcoming American River College theater production of “Skeleton Stories” said that her play was influenced by magical realism, the Day of the Dead and the people she met who hold onto strong superstitions.

Playwright Delondra Williams said she taught adult students in Los Angeles for seven years, and said several of her students believed in the supernatural.

“It was funny, because I had adults who sort of off hand (would) be like, ‘I have to go to Mexico, because my ex-wife cursed me, and I have to go hire somebody to reverse the curse, so I’m going to be gone for two weeks, and then I’ll be back,’” Williams said.

Williams said she had a student who wore a Santa Meurte bracelet and said he wears it because he believes that Santa Meurte would protect him unlike his brother who was shot and killed.

“Skeleton Stories” features a frame story that connects short stories with the main narrative and motifs such as the butterfly, which Williams said is a metaphor for the transformation that the protagonist, Maya, endures before the story ends.

It is believed that the migration of monarch butterflies during the Day of the dare are the souls of those who have died who happen to be returning.

“The idea in this one is kind of she goes one and she meets all these people and they are like living in a loop,” Williams said. “And that is sort of what the afterlife is this loop of these crucial moments in their lives.”

Downs said that slot in the production cycle that she was given allowed her to direct an experimental play and she picked “Skeleton Stories,” one of the ten of the plays she wanted to direct, because it had aspects of cultural diversity.

“First and foremost, this is the voice of a woman,” said Downs. “You can hear it. This is not the ‘male gaze’ on this. This is very female, and it his hispanic, and it is adapting these stories without judgement.”

Downs also said that she had to do a large amount of research on Aztec and Mayan mythology for this production.

Kevin Souther, an actor in “Skeleton Stories,” said that the supernatural aspect of the play appealed to him and was happy that Williams visited ARC.

“I feel like talking to someone I have known for a long time,” Souther said. “It’s super cool to have her there as a reference to where I should go with my character, and where the origins are.”