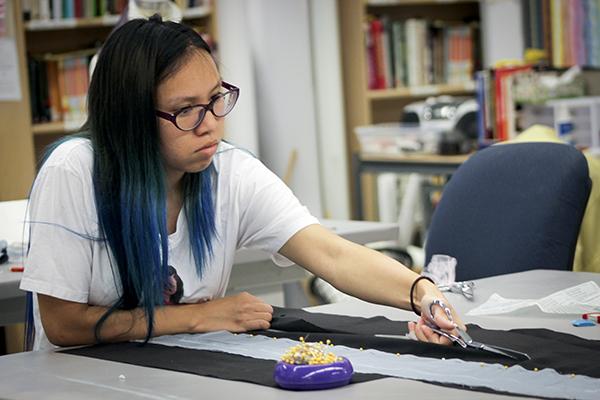 Vicky Phrasavath cuts a piece of fabric for a costume for the upcoming American River College theater production "Music Man." The play will open on Oct. 9. (Photo by Joseph Daniels)

Costume design is crucial to building a world from scratch for a theater production. Yet, this major aspect may be overlooked by the audience.

Costume design professor Gail Russell said that the costumes are just as important as the sets, emphasizing that the sets need to have actors on them to work.

The costume designers for American River College’s upcoming play “Music Man” were able to explain what goes into the process of assembling the outfits.

“Music Man” is a musical that will be directed by Sam Williams and is written by Meredith Willson about a con man who attempts to swindle a town into thinking he is a music organizer.

Russell said that the department had to either make outfits from scratch, reassemble costumes and mesh them together, or to buy the costumes outright.

Russell said that for the for most part, alterations had to be made to the costume in order for it to fit the actor.

Paul Perkins, an actor who is playing the role as Marcellus Washburn, who is essentially the sidekick for the main character “Music Man,” did not initially fit into his costume.

“We had two pieces in this production so far,” said Russell. “When we put them on the actor, the note was, ‘it was perfect,’ and had nothing had to happen to it at all.”

“Just seeing whoever is wearing my stuff I’m like, ‘oh my goodness, I made that, I made that,’ ” said Phrasavath.

Perkins said that putting on the costume helps him envelope himself into the character he is portraying.

“It really helps a lot with the feeling of believing that you’re the character, and when you’re on stage, you believe it, and the audience believes it and that is important for the whole art of the thing,” Perkins said.

Halloween is a satisfying scare, according to ARC professors

Players come from out of state to play for ARC football