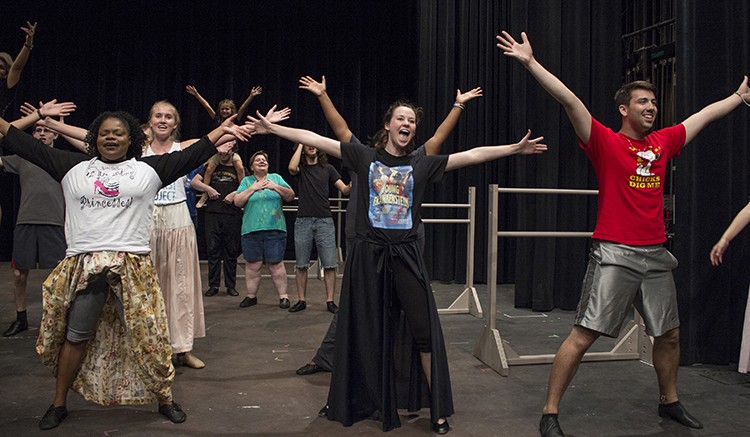 The cast of "The Music Man" rehearses for its upcoming performance at American River College. The play will open on Oct. 9. (Photo by Karen Reay)

An earlier version of this story falsely used the pronoun “he” in reference to student actor Deon Taylor. In fact, Deon Taylor is a woman.

The American River College theater department is currently rehearsing for an upcoming musical, “The Music Man,” that features a con man who attempts to trick a small town into thinking he’s a band organizer.

The musical won five Tony Awards when it made its run at Broadway.

“It’s family entertainment,” said ARC professor Sam Williams, who is the director of the production.

Williams chose “The Music Man” for having a large lineup of characters. This allows him to cast more students for roles.

Student actors said they are enthusiastic about this year’s play.

“When you see the barbershop quartet, you’re going to fall apart,” said Zackary Tucker, who has been selected to play the mayor of the city. It will be his first play at ARC.

“We put a lot of work and time into the show,” said student actor Deon Taylor. “It’s going to be awesome because there’s a lot of talent in the show.”

The play is written by Meredith Wilson. He also is known for writing the musicals “The Unsinkable Molly Brown”, “Miracle on 34th Street” and “1491.”

Taylor, who has been in previous ARC plays, said that she likes that Williams is allowing the actors to develop their characters themselves.

“He leaves it up to us and respects our craft as well as we respect that he can tell us what we’re missing,” said Taylor.

Iris Page is a first-semester student on the Current. Iris is majoring in journalism and plans to transfer to Sacramento State.

Photo gallery: Chalk It Up