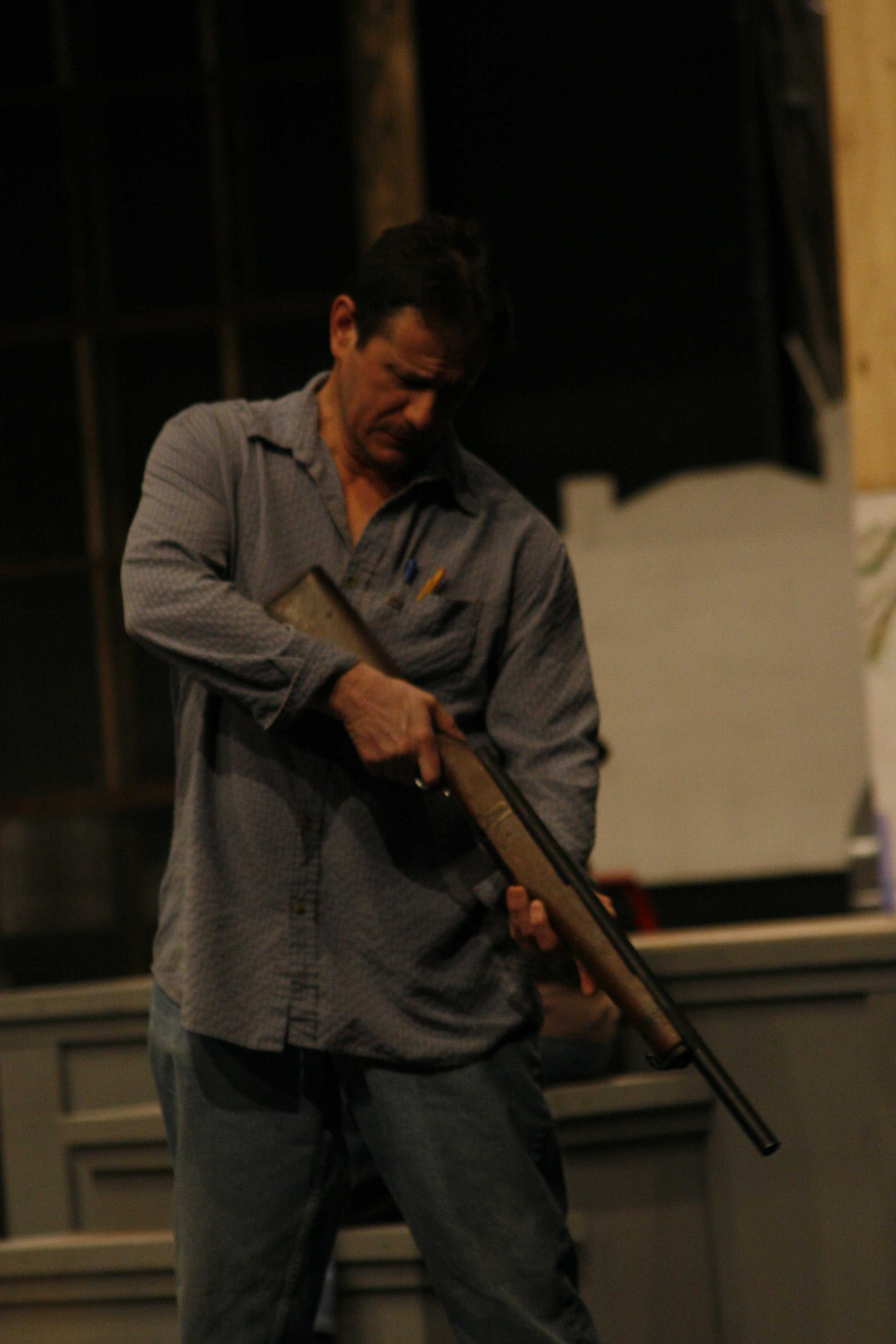 Brandon Lancaster as Atticus Finch with a prop rifle during rehersal on Feb. 13. (Photo by Bryce Fraser)

The year is 1935. America is in the middle of the Great Depression, and racial tensions are reaching a boiling point, especially in the South. A white lawyer is defending a black man for a crime he didn’t commit, yet everyone knows it’s a lost cause. There are threats of lynching. And yet, three kids play in the yard, not quite understanding what problems are surrounding them. This is “To Kill A Mockingbird,” by Harper Lee.

The aforementioned lawyer is Atticus Finch, who is defending Tom Robinson, a black man who is wrongly accused of raping a woman. Atticus is in the minority, believing that Tom deserves a fair trial. The three kids playing in the yard are Atticus’ two children, Scout and Jem, and their friend Dill. At the beginning, they are oblivious and naïve to the racial tension. But by the end, they realize the world can be cold after witnessing the racial injustice in their town in Alabama.

This is why Lee named her novel “To Kill A Mockingbird.” The mockingbird is a symbol of innocence, and to kill one would be like killing one’s innocence.

“To Kill A Mockingbird” is one of the most important stories in American history. Its focus on racial injustice is one of the most powerful in any entertainment medium. It was originally a Pulitzer Prize-winning novel written by Harper Lee in 1960, and it is her only published book. It was then developed into the 1962 Oscar-winning film starring Gregory Peck as the titular Atticus Finch. Since then, “Mockingbird” has been adapted many times by playwrights for the stage.

Director Sam Williams and his cast will act from Christopher Sergel’s adaptation of “To Kill A Mockingbird” starting on Feb. 24 at the ARC Theatre. While the story remains true to the novel, Sergel has changed up some plot points. “(Sergel) changed up the timeline (and has) taken certain creative liberties just as far as in the book, when Scout would be describing what Atticus said, he would take that apart and make it into dialogue. But the main themes and lessons are still there.”

The cast is led by Brandon Lancaster as Atticus Finch, who has starred in plays such as “The Crucible” and “Macbeth.” Despite his experience, Lancaster didn’t approach this role casually. “I studied law quite in depth, and I’ve gone to quite a few different court cases, just to view how lawyers interact with people,” said Lancaster.

His research appears to have paid off. During early rehearsals, Lancaster was working the courtroom as Atticus Finch, complete with a Southern drawl.

Atticus’ children, Scout and Jem, are played by grade-schoolers Emily Botnen and Jake Young, respectively. Botnen’s previous experience includes roles in “Annie” and “Fiddler On The Roof,” and Young has been in “Footloose” and “Guys & Dolls.” They both starred in a production of “Aladdin” with Young’s brother, Brett, who plays their friend Dill in “Mockingbird.” They said they are all friends offstage, so the transition to the three being friends onstage wasn’t too difficult. “We’ve known each other for a long time,” said Botnen, “And my mom is really good friends with Sam as well.”

Botnen and the Young brothers held their own during a recent rehearsal, and with a tremendous stage presence for any actor, let alone child actors.

One of the hardest parts of a period piece is accurately portraying the costumes and sets. During the rehearsal, the sets were bare, and it wasn’t a costume rehearsal. But Lancaster was confident the audience will like the final product. “We have a great costume department. Our costume designer has researched (the era) and the whole cast has studied … costumes and even gestures. You can’t give a thumbs-up, that was something you do in the 1930s.” The lack of yet-to-be-completed sets makes it interesting for the actors as well. “It’s exciting, but it keeps us on our toes,” said Lancaster.

For everything that “Mockingbird” stands for, it is not without controversy. There is offensive and racially insensitive language in the book, and Sergel keeps it in his adaptation. Theater-goers might be offended, but they should understand the language used is key to the story and its themes. “(It’s offensive), but you actually get into the character and you get into the mindset of what people said (in the 1930s) and it comes a little more natural, but when you’re practicing lines, you’re (thinking), ‘Whoa, did I just say that?’” said Botnen.

For the brutal but powerful death scene of Tom, however, they take a less-controversial stance. “The actual death happens offstage, but onstage it’s discussed. People will get to witness the effect (his) death has on the town (because) everyone was rooting for him,” said Lancaster, “it’s really emotionally ringing.”

If the rehearsal were any indication of how the final production will turn out, “To Kill A Mockingbird” will be a must-watch this semester. Be sure to catch it on opening night, Feb. 24, through March 2, only at the ARC Theatre.

In our heads- Josh Baumbach