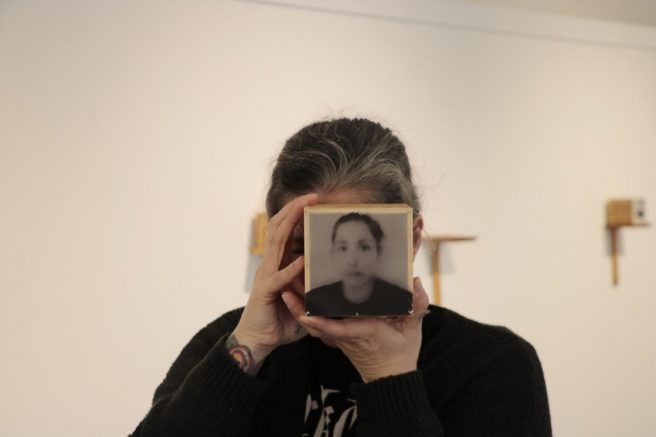 Photographer Angela Casagrande displays her exhibition, “Everything will Disappear,” at the James Kaneko Gallery at American River College on Nov. 28, 2018. Casagrande holds up a box with a picture of her on it. The box contains pieces of her hair because she said making these boxes caused her a lot of stress and made her lose hair. “Everything will Disappear” will run at the Kaneko Gallery until Dec. 14. (Photo by Gabe Carlos)

A new show at the The James Kaneko Art Gallery at American River College highlights photographs that represent a collection of memory. Angela Casagrande’s show: “Everything will Disappear,” includes photos of families with some, not all, faces blocked out. There is also boxes with items in them that ring close to Casagrande’s childhood. The exhibit opened Nov. 19 and will run through Dec. 14.

Casagrande said that her work focuses on faulty memory: where something that she saw often as a kid maybe doesn’t remember as well when she gets older.

“There’s a phrase that I found that I really like called the ‘afterlife of memory,’ and what happens to our memory when it degrades or goes away,” Casagrande said. “Because a lot of memories of family members are not as clear as they used to be and that’s a little worrisome as I get older so I don’t maybe remember how somebody sounds or I don’t remember their face as well.”

In a statement from Casagrande about the exhibit, she said: “‘Everything will Disappear’ examines memory as an aspect of liminal space, the beings that inhabit this space and the artifacts left behind, both physical and immaterial. Encasing photographic images in enthusiastic wax references divination methods and preservation practices.”

Casagrande is from Humboldt County in northern California. She received her bachelor’s in fine arts from Humboldt State University and has been living in Sacramento ever since as a full-time artist.

The gallery features some amusing artifacts, such as small boxes with photos of relatives with some items inside the box. There is also a box with a picture of Casagrande’s face on it that contains items like her hair.

Along with the photos of some faces being blocked out, Casagrande said she was inspired by photographer, Ruth Thorne-Thomsen, who did something similar. The way Thorne-Thomsen did it was that she had many dots that blocked the faces in the family photo.

“I tied that back to the faces being gone, so, as you forget somebody’s features —  like I don’t remember my grandmother’s face as well as I used to — so what would I put in place of that?” Casagrande said. “And I thought that dots was a good way for something to represent that was not there, kind of like atoms, or a spirit, it’s just like vague figures.” 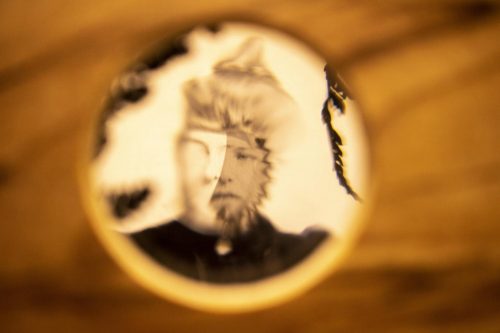 Inside one of Angela Casagrande’s camera obscures at the Keneko art exhibit at American River college Nov. 28, 2018.

Patricia Wood, assistant art professor ARC, and curator for the Kaneko, says that gallery is great for the ARC art scene and hopes to be more than just pictures on a wall.

“I think it is a great benefit for the ARC community to see works that utilize the photographic image in a new way. Even though they are photo-based works, they are really much more than that,” Wood said. “In many of the wall pieces, other items are incorporated and brought together with the photo through the use of encaustic. These objects become symbolic and add to the meaning of the images in the photos.”

Wood said when art majors walk into the exhibit, she wants the students to see how each piece relates to each other.

“Pieces have relationships to one another and can take on new meaning as they are viewed together,” Wood said.