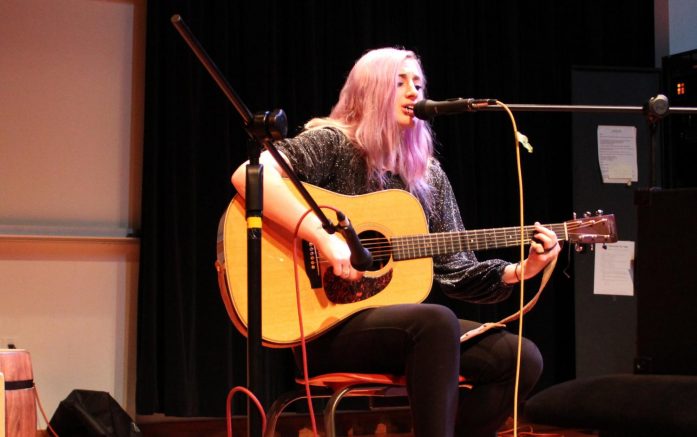 Sitting in the dim lighting of the small performance room in the music theater wing at American River College, one would expect just another ordinary musician to step up to the microphone with a guitar and sing just another ordinary song, but there was something particularly intriguing about Riddle Anne.

At a recent ARC Acoustic Cafe performance, her voice cut through the silent crowd with a passion that an artist could have only developed from years of pain and fighting to feel joyful, despite a few breakups and a broken relationship with her parents. There was a gripping story in her song that captivated every listener in the audience.

“A worried laugh, a panicked smile / I swear I’m okay even though it’s a lie / you ball your fists and I fight to cry / don’t worry about me, I do this a lot,” are lyrics from her emotional song, “Let’s Pretend We Work,” one of the two songs she performed at the Acoustic Cafe in March.

Music and composition major, Riddle Anne has been at ARC for just one short semester. Anne gave up a possible career in genetics to pursue music wholeheartedly and is taking songwriting classes to refine her music abilities. She has performed in three Acoustic Cafe performances on campus, showcasing her multifaceted songwriting abilities.

Anne is the lead singer and guitarist of her band, Us As Fighters. The group released a pop/rock extended play in February, and has another electronic dance music (EDM) EP in the works that she is hoping to release in the next couple months.

What sets Anne apart from other musicians is her raw energy and drive to create a positive message in the music industry.

“People always have this feeling of not being good enough, but we are enough,” Anne says. “You have to remember that you are worth it, and no matter how insignificant you feel, you’re important.”

According to Anne, her home environment was challenging growing up because she was pressured to throw her dreams of making it in the music industry out the window and follow the status quo.

Back in 2014, Riddle acquired a degree in genetics from the University of California, Davis, but did not find that career path fulfilling.

Now 26, she’s decided to solely focus on her music career ,and network as often as possible with other music-minded people. ARC has a well-known music program throughout the Sacramento area and attracts many musicians, like Anne, looking for pathways and platforms to share their music.

“I wanted to be in a place with people who have music on the brain,” Anne said. “People in music business, music management, that I can connect with. It’s not enough to just be a songwriter — you have to network.”

Two years ago, Anne formed a band originally named Petracore, but after losing band members, she and her bandmate, music business major and bass player Heather O’Bitts, decided to give the band a fresh start in August 2018 with a new name: Us As Fighters.

Every song released by the band has been written solely by Anne. She is a musician, lyricist and vocalist all in one, and works with three producers to help with mastering each track.

Us As Fighter’s first EP of three songs was in a pop/rock style with sad elements, but since the EP’s release, Anne decided to shift the music to a more upbeat, pop EDM sound.

“I want people to feel like they can dance the sadness away,” Anne says. “The best thing you can do when you’re sad is to find some silver lining and get your mind off your sadness.”

Anne says Us As Fighters’ main goal is to reach as large of a fan base as possible to spread their positive message. Anne is constantly adapting the music to sound mainstream and current, with hopes the band will reach more listeners.

O’Bitts says she’s comfortable with giving Anne creative control because she knows they’re always going to be on the same page.

“We understand each other,” O’Bitts says. “When she comes to me with a new song, we already know we’re going to be able to convey and see eye to eye on it because we’ve been through it together already.”

Anne and O’Bitts have been close friends for six years, and are the only two original band members left in Us As Fighters since its formation two years ago.

“I’ve never met somebody who is not afraid to show the good, the bad and the ugly. She allows herself to be vulnerable,” O’Bitts says. “When people listen to her music, they can feel what she’s feeling. When you hear her voice, you can hear the emotion and pain behind it.”

Anne and O’Bitts have a common goal of maintaining the band’s positive message and using their music to uplift and inspire.

“It is a fight to go from sad to happy, and people need to know they’re not alone,” Anne says. “You’re a fighter. We are fighters. Us As Fighters.”

Be the first to comment on "Riddle navigates the music industry"