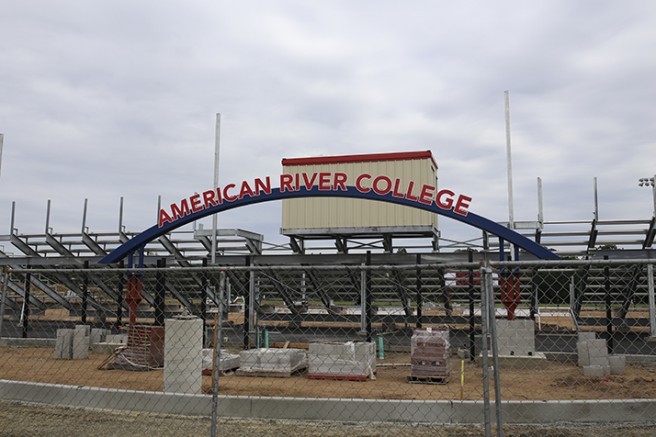 Construction of the entrance to the new American River College soccer stadium. The stadium will be completed in the the fall of 2016 and will seat 1000. (Photo by Kyle Elsasser)

American River College’s soccer program will be getting a huge upgrade in their playing field for the upcoming season, with the construction of a new 1,000 capacity soccer stadium.

The stadium will be included in the multi-million dollar project that includes new practice fields for the football and soccer teams and reconditioning the fields.

For the past 15 years, ARC’s men’s and women’s soccer teams have been playing on the field that backs up to the creek, which has decreased in quality in the past few years according to women’s head coach Paul Arellanes.

Along with an improved playing surface, Arellanes is excited that the stadium’s lights mean they will be able to have later games.

“For the last 23 years we’ve had to play our games at 3 or 3:30 and a lot of parents are working during that time and so it’s not conducive for people coming out and watching,” Arellanes said.

Another advantage that Arellanes is hoping the stadium will bring to the program is that it will be a better image for recruits when they are being showed the stadium. 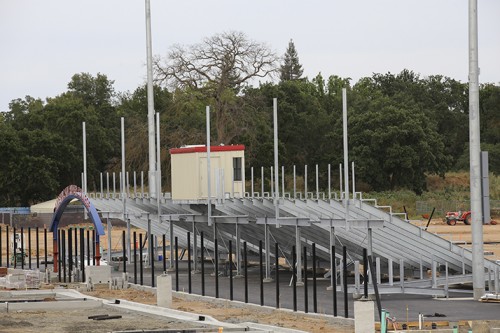 Construction of the bleachers and press box for the upcoming American River College soccer stadium. The stadium will be completed in the the fall of 2016 and will seat 1000. (Photo by Kyle Elsasser)

“The surface that we’ve been playing on has always been very good, but you take a recruit out there to the back field, like this is where we play and they’re looking around like where are the stands, where are the bleachers?”

Men’s soccer team head coach Paul Hansen also has plans to maybe use the stadium for other things besides ARC soccer games.

“We can use it for some cool outside events and games of interest throughout the year,” Hansen said. “We will be able to fundraise better with the facility, running camps and clinics.”

Hansen also expressed the excitement that players have for the incoming stadium.

“Oh for sure players do care about where they play. … They are excited about playing on the grass under the lights during night games,” Hansen said.

Assistant Athletic Director Rick Anderson is also very excited for the improvements that this will bring to the soccer program.

“It’s going to be such a better experience for the student athletes compared to what they have right now,” Anderson said. “It’s going to be the premier soccer facility in all of California.”

Although Anderson did not have much involvement in the process of getting the stadium built he always voted in favor of it when it came up according to Anderson.

“The stadiums going to hold 1,006 people, we don’t get 1,006 people at our home soccer events, but if we can generate some more crowds with a nice stadium that will hopefully make a huge difference,” Anderson said.

Both Arellanes and Hansen are hopeful that the project will be completed by the first game of the season as the stadium will not be opened until all aspects are completed according to Arellanes.

In the meantime, both teams will be finding places to practice off campus during the summer.

“It’s small in terms of big time programs, but for our level I think it’s going to be perfect. It is really designed for the community college level and our program,” Hansen said.

Be the first to comment on "ARC’s soccer program will see a big upgrade with new 1,000 capacity stadium"