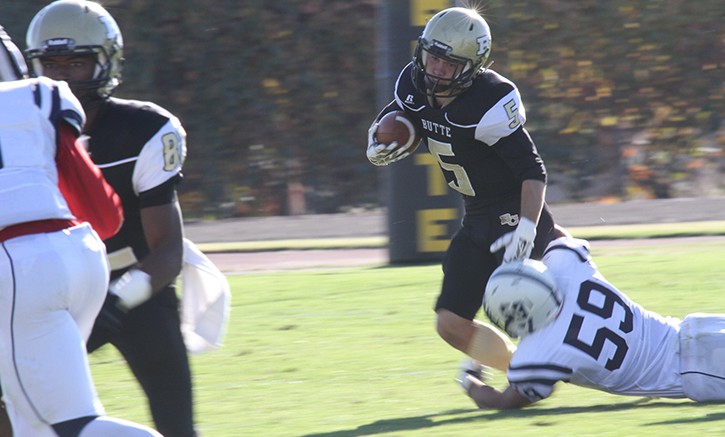 Butte took possession with 14.9 seconds left and ran two plays, the first of which was an incomplete pass. With 9.7 seconds on the clock, Butte brought King for the last play of the game, presumably for King’s arm strength.

King’s prayer toward the end zone was answered when Fishback came down with it, stunning ARC players and sending Butte fans into a frenzy.

The loss was big for ARC, which no longer controls its own destiny for postseason play.

“With a win here we would have been in (playoffs), now we’re going to need some help,” said head coach Jon Osterhout.

The final play was not without controversy, as a flag was thrown indicating that at least one official thought that Butte quarterback Taylor King had crossed the line of scrimmage before his game-winning heave.

Officials convened briefly before the flag was picked up and Butte escaped with a win.

“I didn’t like the explanation at the end of the game,” said Osterhout. “They throw the flag and then wave it off. You threw the flag then decided that he actually wasn’t past the line of scrimmage once we see the touchdown. It is frustrating but we can’t put it on the officials.”

ARC quarterback Jihad Vercher thought the defense got fooled on the play.

“They came out and made a great play,” said Vercher. “(The) defense thought they were going to run the ball.”

“Tough game,” said wide receiver Jonathan Lopez, who finished the game with five catches for 62 yards. “We didn’t do what we had to do.” 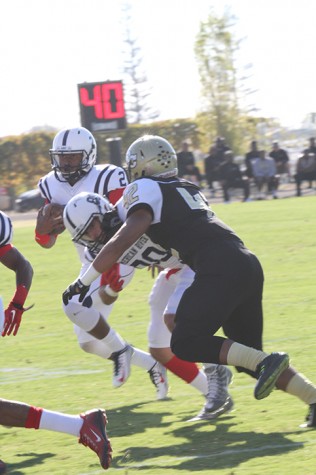 American River College quarterback Jihad Vercher dashes behind a block set by wide receiver Marc Ellis. Vercher finished the game 18 of 31 for 307 yards passing while Ellis had 72 yards on three catches, including a 38-yard touchdown. (Photo by Nicholas Corey)

ARC, however, racked up a total of 135 penalty yards which stalled several drives.

“Penalties go both ways, but at the end of the day in that situation we have to execute to win a football game,” said Osterhout.

Butte scored on a 22-yard pass from Tommy Hayes to running back Martin Flemming which put Butte up 7-6.

Keil made a 25-yard field goal to put ARC up 9-7 and ARC extended the lead to 17-7 Vercher hit Malik Dumetz outmuscled a Butte defender for the ball and sprinted for a 36-yard touchdown while Vercher ran in for the two-point conversion.

Vercher was 18 of 31 passing for 307 yards with two touchdowns and one interception. He lead a 92-yard, 7-play drive in the fourth quarter that culminated into a 38-yard touchdown pass to wide receiver Marc Ellis that put ARC up 24-21 with 4:43 to play.

Ellis finished with 3 catches for 72 yards.

“It was a championship environment,” said Osterhout.

“It was a hard-fought game and I give all the credit to Butte College, coach Jordan and his staff for continuing to believe.”

ARC hosts Sacramento City College this Saturday at 6 p.m. in the team’s final game of the regular season.