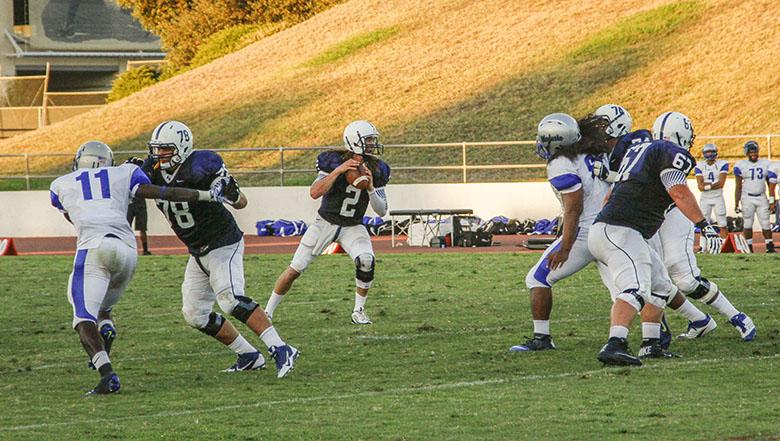 Tanner Trosin and his five touchdowns helped lead the American River College football team to their first win of the season against Modesto Junior College, 37-27.

“I might joke around with him a little bit, we’ll have a couple laughs about it,” Trosin said.

The team though got off to a slow start going four-and-out on their first possession, but after giving up a touchdown and with only five minutes left in the first quarter they began to find their way.

“We came out flat, and I was kind of disappointed in how we executed every play when we came out in the first couple of drives,” Trosin said.

The team then turned it around and in a swiftly contested game that saw the lead flip-flop back and forth, the momentum shift swung in ARC’s direction with the first of two interceptions by freshman defensive back Robert Sanders.

“They (the coaches) put everyone in the best position they could and we went out there and executed,” Sanders said.

With ARC up a touchdown and under four minutes left in the game MJC snapped the ball over their punters head in the end zone, causing a safety, which gave ARC two points and the possession of the ball with precious minutes remaining.

The team then ran out the clock.

“I feel pretty good that we got this victory,” Trosin said.

This game was extra special for head coach Jon Osterhout as well, it was his first win as leader of the program.

“The players gave me the game ball, and gave it up for me,” Osterhout said. “I couldn’t be more proud of our coaches, they did a tremendous job putting our players in good positions to be successful, and then the players just flat out went out and executed. I couldn’t be happier but it’s definitely good to get number one out of the way.”

The next game for ARC is against DeAnza College on Sep. 13 in Cupertino at 1 p.m.

Their next home game is Sep. 27 against City College of San Francisco at 6 p.m.