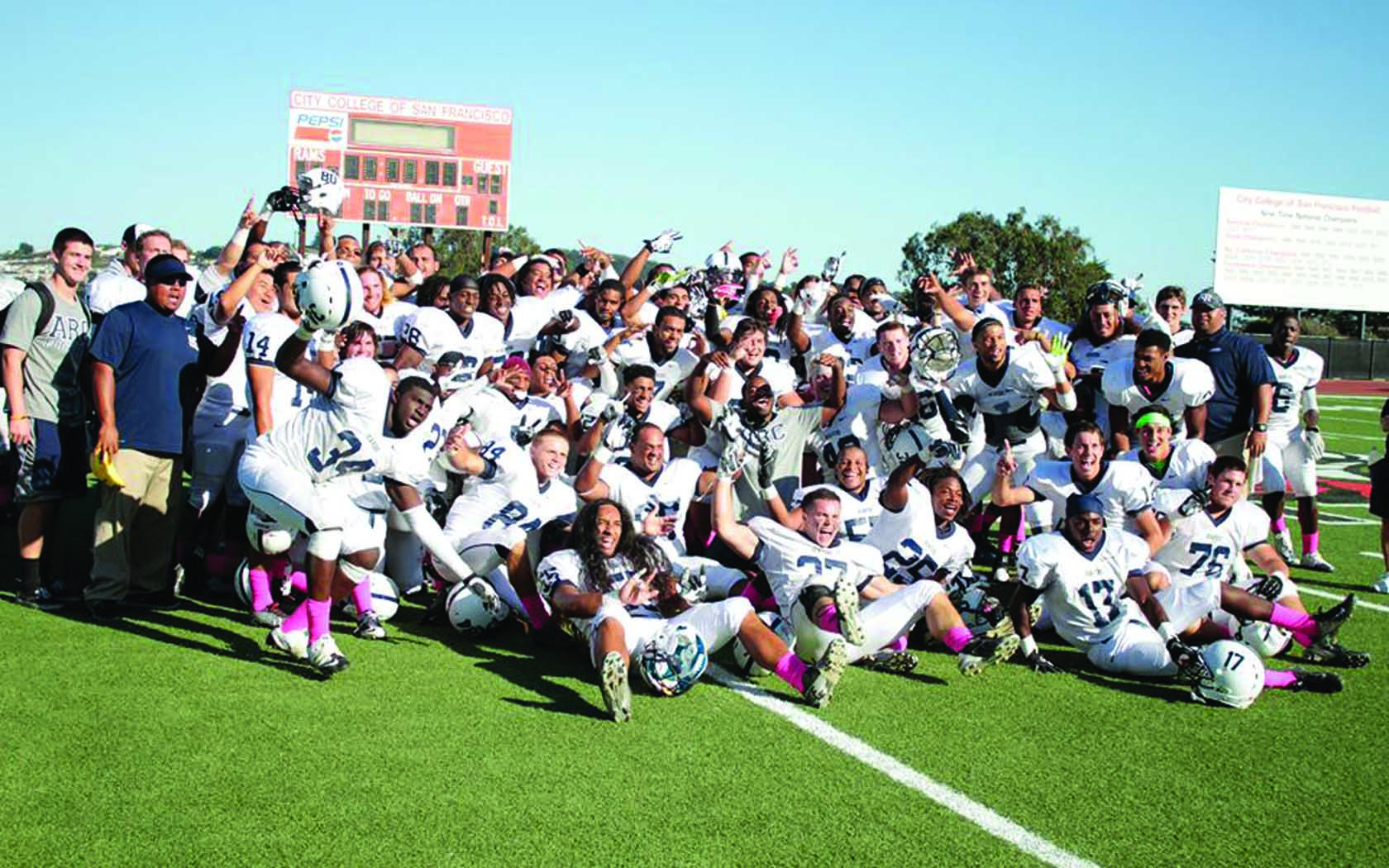 "I heard a couple of terms thrown around, 'redemption,' and I heard, 'payback.' I think for the 2013 ARC football Beavers it means 'success' and that's what I told them. So let's handle success well, celebrate, and come back because we have five more games." - Jerry Haflich, ARC Football Head Coach

Possibilities grow for undefeated Beavers after routing No. 1 team in state

It’s something every athlete hopes for: a chance to prove that he or she is the best on the biggest stage.

The past two seasons have accounted for tremendous change in the American River College football program. The team left the Mid Empire conference for the Valley Conference, which made it eligible to compete for the state and national championships.

The Beavers have propelled themselves onto the nation’s football radar and have proven they have what it takes to compete with the best teams. On Oct. 5, the Beavers faced No. 1 team in the state City College of San Francisco and dominated in a 34-13 victory in San Francisco. 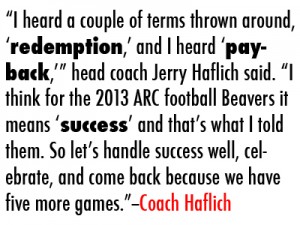 “They seized opportunities, all day,” head coach Jerry Haflich said. “We talked about carpe diem… and that was kind of our rally cry.”

The last time these two teams met was the Northern California Community championship game. The Beavers lost to the Rams 41-36, after an 11-yard touchdown completion from quarterback Mike Hicks to wide receiver Diondre Batson was negated on a holding call with no time left on the clock.

“I heard a couple of terms thrown around, ‘redemption,’ and I heard ‘payback,’” head coach Jerry Haflich said. “I think for the 2013 ARC football Beavers it means ‘success’ and that’s what I told them. So let’s handle success well, celebrate, and come back because we have five more games.”

ARC football is currently 5-0 for the second time in three seasons under Haflich and is ranked No. 3 in the nation and in the state.

“We just look at it game-by-game,” sophomore running back Drake Tofi said. “We don’t try to focus on the rankings or let those things come into our mind. We just play one game at a time and each game is like a championship game for us. We come in with the mindset that every game is an important game because it’s the next game.”

Since Haflich has taken over the coaching position at ARC, 8 teams, including the Beavers, have gone undefeated out of 70 community college football programs

In 2011 the Beavers went 11-0 and it seemed that no defense in the nation could stop the offense, which averaged 48.3 points per game.

This season it seems like no offense in the nation can challenge the Beavers defense, which is ranked No. 1 in the state allowing 11.2 points, 150.0 passing yards, and 33.2 rushing yard per game. The team also has totaled 23 sacks, 14 interceptions, seven fumble recoveries and a touchdown.

“We bend, but we will not break, and that’s very cliché but you know with clichés they’re used because something happens all of the time,” sophomore defensive linemen Sione Umufuke said. “With us we gave up a couple of things, had a couple of missed assignments, but then when we had to absolutely get stops we came through with it and that goes to the testament of our coaches and the way we practice.”

The price of victory is high and no one knows that better than a head coach. For Haflich this is the statement win he’s longed for.

“It’s one of those deals where you want to hopefully earn respect. Hopefully it earns opportunity,” Haflich said. “San Francisco has been the mark for so long they’ve been the standard in terms of wins so it’s really tremendous for our football program. For me personally it’s a great win, I’m just so proud of our kids.”

The team is ready to start divisional play and hopefully it can claim its first state championship.

“It feels like we proved that we’re number one,” sophomore defensive linemen Trevor Jones said. “It feels solid. I knew we were. We knew we were. We just had to go out and prove it, and proving it is the icing on the cake.”

The team’s next game is at home against San Joaquin Delta College at 1 p.m. Saturday.

More buck for your book

Amor serves up an ace