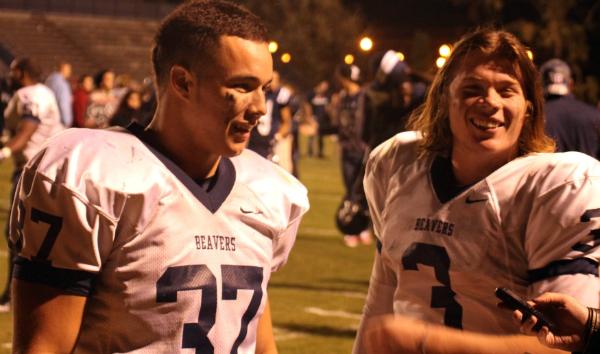 The Beavers trailed 7-0 early in the game after SRJC quarterback Mike Pierson connected with running back K’Lan Anderson on a 31-yard touchdown 8:36 into the first quarter.  After that scoring drive the SRJC Bear Cubs were held scoreless by ARC’s defense until three seconds remained in the third quarter.

Running back Drake Tofi put the Beavers on the board with 14 seconds left in the first quarter after a 38-yard completion from freshman quarterback Jake Bist to Tofi put the team at their 5-yard line. On the next play Tofi picked up the 5 yards for the team’s first touchdown. Freshman kicker Charlie Vue missed the point after touchdown, leaving the Beavers trailing 7-6 heading into the second quarter.

The Beavers took the lead with 7:45 left in the first half when Bist found freshman wide receiver Adonis Griffin in the end zone for a 5-yard completion.  A hole in SRJC’s defense left sophomore wide receiver Dan Thomas open for a two-point conversion. The Beavers led 14-7 after that play and continued piling on the points.

Bist led the team to eight scoring drives in the first three quarters. Six of the drives resulted in touchdowns while the other two led to field goals. Bist would finish the game by completing 60 percent of his passes for 227 yards, five touchdowns, a two-point conversion and an interception.

“It’s all about being prepared and the coaches’ calling the right plays,” Bist said.

On the receiving end of three of those touchdowns was sophomore wide receiver Tyler Trosin who now has 10 touchdowns in four games and leads the state in touchdown receptions. Trosin finished the night with five receptions for 102 yards.

“It takes a whole team effort,” Trosin said. “It’s not just one guy out there.”

The most important drive of the game arguably happened in the fourth quarter after Pierson drove the Bear Cubs down the field for back-to-back touchdown drives.

ARC’s offense was given the ball with 9:32 left in the fourth quarter and a 48-21 lead. The drive was led by sophomore running back Mark Jenkins who capped the 42-yard drive off with a two-yard rushing touchdown using nearly five minutes of the clock. The Beavers led 55-21 after that possession.

After the touchdown Jenkins ran over to the sideline to thank the offensive linemen whose blocking made it possible for him to score.

“It was very important to thank the (offensive) line; running backs do nothing without the line,” Jenkins said.

The Beavers remain undefeated four weeks into the season after putting together their most complete game offensively and defensively against the Bear Cubs.

“After the first series things started gelling,” head coach Jerry Haflich said. “It’s a lot of fun watching the young kids come together. I thought that Jake (Bist) was tremendous in the passing, Drake Tofi was tremendous, and the offensive line did a fantastic job. Our defense created a lot of turnovers and provided more opportunities and that’s what we said we had to do.”

Oct. 5 the Beavers will be put to the ultimate test in what seems to be the most critical game of the season as they take on the No. 9 ranked team in the nation City College of San Francisco.

The matchup versus CCSF will be an opportunity for the veteran Beavers on the team to exact revenge on the Rams after ARC lost to them in the San Francisco Community College Bowl, which ended the team’s state title hopes last season.

Be the first to comment on "Battle of the unbeaten: No. 6 ranked Beavers blow out Santa Rosa Junior College on the road"