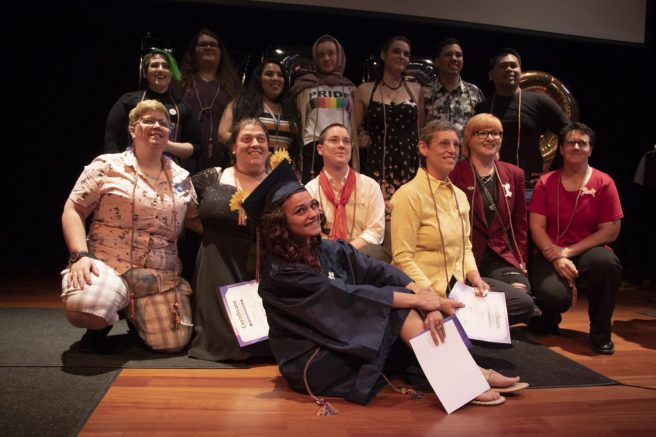 Fourteen graduates collected their diplomas on May 3 in the music recital hall at American River College's Lavender Graduation. (Photo by Ashley Hayes-Stone)

Fourteen graduates walked across the stage on May 3 to collect their diploma, rainbow cap tassel and unicorn pin from the American River College Pride Center staff. Departments across campus banded together to ensure that the 2019 Lavender Graduation was an uplifting and powerful event.

Lavender Graduations celebrate the accomplishments of lesbian, gay, bisexual, transgender and queer students with their family and allies. The first Lavender Graduation was held in 1995 at the University of Michigan, and ceremonies are now held at campuses across the United States.

Joshua Moon Johnson, ARC’s dean of Student Services Equity Programs and Pathways, made it clear that despite the challenges that students from the LGBTQ+ and other marginalized communities face in education, the event was about much more.

“Today, we want to make sure that we’re celebrating, and I think that many times in our community we do focus on the challenges … but I want to be able to name this space as a place of celebration, a place of community and a place of healing,” Moon Johnson said.

He also thanked the faculty at ARC and in the Los Rios Community College District system that have given students guidance and support.

“This room, this year, is testament to the amazing work that our students and our faculty and our staff can come together to do,” Moon Johnson said. “This is a testament of all the great things we can accomplish when we come together, when we unify and when we continue to focus on the progress that we can make within our communities.”

The number of graduates was almost triple the number from ARC’s first ceremony in 2018. This year was also the first Lavender Graduation since the official opening of the Pride Center, and was held in the music recital hall instead of the Hub.

Criminal justice major Kayla Sepulveda said she has seen a lot of change since she started attending ARC in 2006. One of the most notable changes brought to LGBTQ+ students was the opening of the Pride Center.

“I’m so thankful for this community, we’ve done so much here,” Sepulveda said. “I’ve been here since 2006, so everything started from scratch.”

Graduates from other LRCCD colleges also attended, including Sacramento City College student Danny Thirakul, who served as the Los Rios Student Trustee for the past academic year.

While Thirakul says he is happy to see the growth of programs for the LGBTQ+ community in Los Rios, he said he hopes that next year’s Lavender Graduation will be promoted and recognized on a larger scale.

“It’s definitely a community of Los Rios that’s not as big, or at least not as recognized as it should be,” Thirakul said.

Thirakul said he is transferring to California State University, Sacramento this fall, but that he’ll miss attending community colleges in LRCCD.

“I’m happy that I’m leaving, but very sad that I’m going to be leaving a lot of this behind. Part of me still wants to stay,” he said.

Be the first to comment on "Students shine at Lavender Graduation"