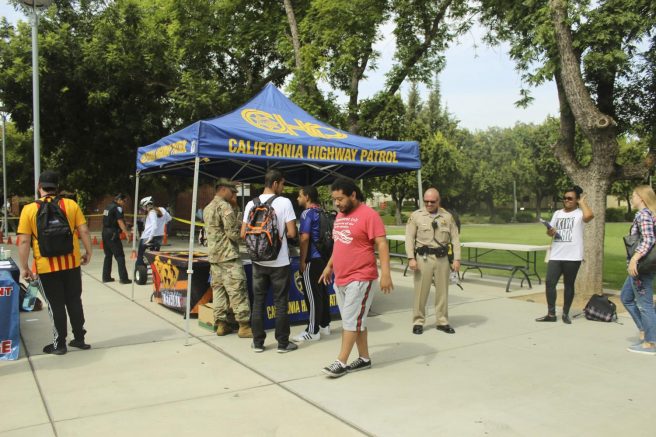 Tyler Heines, theater major, practices walking a straight line before wearing drunk simulation goggles, in front of the library at American River College on Sept. 12, 2018. The Los Rios Police Department and California Highway Patrol brought the goggles and tricycles to campus to raise awareness about the dangers of drunk driving. (Photo by Itzin Alpizar)

“How many zombies would Rob Zombie rob if Rob Zombie could rob zombies?” asked Officer Rosie Salazar of the Los Rios Police Department in front of the American River College Library on Sept. 12.

“It is a tricky question,” Salazar said while giving the students a handout from the California Office of Traffic Safety with a list of zombie types and behaviors while driving, such as mobile zombie, glam zombie, grubbin zombie, party zombie and daydreaming zombie.

The survival tips for zombie behaviors while driving suggested that drivers should groom, eat, and pre-set a playlist for the ride before driving. The pamphlet also warned drivers to never talk or text on the phone, avoid taking notes, looking at a map, or digging around for information, and to listen — don’t watch — the GPS device while driving.

In the background, other students laughed with LRPD officers as they watched students try to keep their balance while walking in a straight line while wearing drunk simulation goggles.

The officers from LRPD and California Highway Patrol visited ARC’s campus and will be visiting Los Rios community college campuses during September to raise awareness about distracted and drunk driving.

Tyler Heines, a theater arts major, said it was a fun experience wearing the simulation goggles, but drunk driving is not a fun experience in real life and offered some suggestions on how to avoid driving under the influence.

“I know better than to drink and drive. When I do drink, I make sure to have friends with me or take a Lyft home,” Heines said.

Pavel Popovich, a student in the paramedic program, recommended students try the goggles.

“It was a pretty nice experience, it’s better not to drink and drive. Everybody should try [the goggles]. It’s pretty fun. I felt very drunk,” Popovich said.

Some students tried to put some effort to actually test their ability to balance while wearing the goggles, like psychology major Jose Samaro, who felt drunk too.

“I don’t know how to describe it. It’s a great experience. People should try it. I maintained my balance, I just couldn’t follow the line,” he said.

By noon, the crowd size had increased, with people attracted to the scene by the four CHP cars parked by the Student Center and the excited students gathered in front of the library, trying to get a chance to ride the tricycle around safety cones while wearing the goggles.

Allen Marinovich, a chemistry major, and Muhammad Rutial, an engineering major, decided to each ride a tricycle on the same round.

“I was scared because I couldn’t see. I was running over everything,” said Rutial, who struggled to turn around the final safety cone.

“I feel a little sick. It’s like a super tunnel vision,” said Marinovich said, after taking off the goggles and shaking his head.

The DUI obstacle course happens around every two years, said Robbie Rice, Clerk I from the LRPD, who was hosting a colorful spinning wheel game that gave participants a chance to win a surprise prize such as water bottles, keychains or CHP bracelets among others.

The prize wheel had 14 slots filled up by handwriting with the options of “jail” or a question number from a notepad. Each question focused on dangerous scenarios and what the student would do during that situation.

“If you go to ‘jail’ that’s it, but if you get a question and answer it right, you get a prize,” Rice said. “What would you do in an active shooter situation?”

Rice had another handout for this question with a quick reference guide made by LRPD on what to do in the case of an active shooter situation on campus, which listed what kind of information to provide to 911 operators in those situations, such as to give the location and physical description of shooter and how many and/or potential victims and their location.

According to the LRPD guide, “an active shooter is an individual actively engaged in killing or attempting to kill people in a populated area.”

At the CHP table, Officer Amy Walker spoke to students to raise awareness about distracted driving, which Walker said is the number one killer among teenagers.

“[Teenagers] get distracted from using cell phones, doing their makeup, reading or talking with their friends,” Walker said. “When driving, just drive. Not even with hand-free [devices]. Distracted driving is dangerous.”