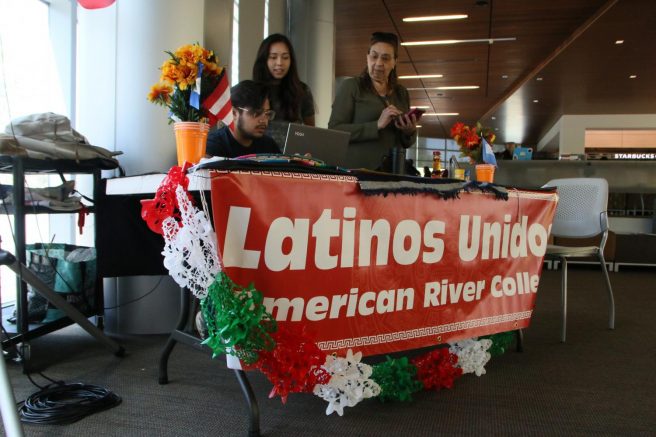 Members of Latinos Unidios at American River College behind an information booth regarding Cinco De Mayo on April 24, 2018. (Photo by Michael Pacheco)

The club planned the event to take place the week before the holiday, due to the scheduling of Asian-Pacific Islander Heritage Week events happening the same week.

The event consisted of a small informational speech regarding the holiday itself as well as a showing of the 2013 movie “Cinco de Mayo, La Batalla,” which is a dramatized depiction of the Mexican army’s victory over the French in the Battle of Puebla in 1862.

Science major Miguel Rodriguez-Herrera said he hoped that the event would be a good way to inform people about the meaning behind the holiday.

“We are just trying to get people to know what Cinco De Mayo is all about,” Rodriguez-Herrera said. “A lot of people don’t really know what they are celebrating.”

Rodriguez-Herrera was introduced to the club by Alexandrina Chavez, who was a member at the time. Now as the current president, Chavez pointed out some of the difficulty the club faced leading up to the event, despite planning for the whole semester.

Aramark, the food provider for the Los Rios Community College District, informed the club that they would not be allowed to sell tamales on campus on the Monday leading up to the event, which Chavez said she found to be unusual considering the company’s stance towards prior events where they did not intervene.

Aramark did not respond to a request for comment from the Current.

“We’ve sold tamales on campus before, outside of Club Day, for Latinx Heritage Day, with absolutely no problem,” Chavez said. “Two days before picking up the order we had to cancel.”

This led to some other issues, since the club intended to use the money from selling tamales to pay for a live band they had planned to have perform. Instead, they had to opt for speakers playing music outside of the Hub before the airing of the movie.

The rest of the event went on as scheduled despite the difficulties and the movie was shown. Refreshments were also provided for free during the movie, courtesy of Latinos Unidos.

Does the Black community have a widening divide?