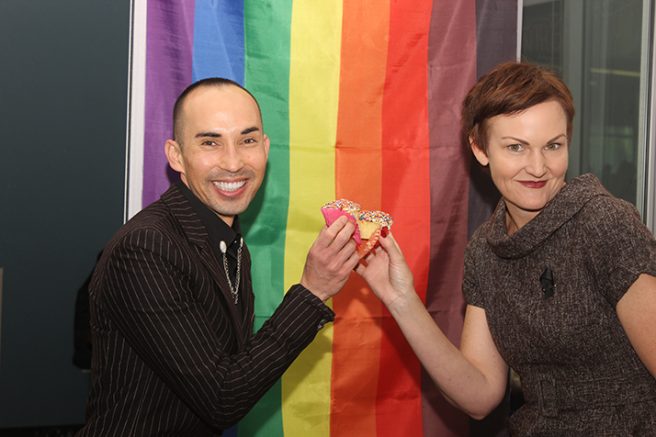 Joshua Moon Johnson and Emilie Mitchell cheer cupcakes to celebrate the opening of the Pride Center on April 5, 2018. (Photo by Tracy Holmes)

American River College’s LGBTQ+ Pride Center launched on April 5, with an opening ceremony that hosted speeches by many who played a major role in its creation.

ARC is now one of only three community colleges to acquire its own pride center, the others are Sierra College and Mt. San Antonio College in Walnut Creek.

The center was designed to create a safe space for students in the LGBTQ+ community on campus and is in accordance with the ARC commitment to equality and inclusion.

Joshua Moon Johnson, Dean of Student Services and Equity Programs and Pathways at ARC, played a major role in the Pride Center getting off of the ground. He gives direction to student life and also works on recruitment of new hires and outreach at the Pride Center.

“I recognize your value, I dedicate this space to you,” Johnson said in a speech at the ceremony.

The Pride Center is located in the HUB on ARC’s campus. Johnson said the Hub was chosen because it serves as a “center for diversity and equity inclusion.”

“This space is a community space for anyone really, with a focus on supporting people who are historically or currently disadvantaged in higher education,” Johnson said.

He explained the Pride Center is still hiring, and more services will be added over time.

“We are hiring a full-time Student Personnel Assistant, a full time classified staff assistant and their job is to support the LGBTQ+ community here,” Johnson said.

Dr. Emilie Mitchell, a professor of psychology at ARC, co-adviser of FIERCE, the LGBTQ+ student group on campus and Pride Center Coordinator also spoke at the open ceremony.

In Mitchell’s speech she said it was up to the LGBTQ+ community to help fight for human rights.

“We need to acknowledge that we exist in a larger role, and we need to talk about directly the killing of Stephon Clark,” Mitchell said.

For Mitchell it is the responsibility of the LGBTQ+ community to fight for diversity, to fight for those who are facing discrimination every day.

“We stand and fight, not just for the members of the LGBTQ+ community who face these struggles on a daily basis but for all community members,” Mitchell said. “I think it’s important that we all recognize that.”

Mitchell acknowledged that the killing of Stephon Clark has reminded the LGBTQ+ community of their duty to stand and fight against discrimination and police violence.

“We at the Pride Center stand first and foremost as an agent of social change; for social justice. We stand against and fight against systematic racism, discrimination, oppression, harassment, police violence and mass incarceration of people of color,” Mitchell said.

Dr. Robin Neal, the Vice President of Student Services at ARC, has been involved in the process of putting together the Pride Center throughout the years.

“It’s been a long process, there has been a lot of advocacy for the need to have a space where it’s in a central part of campus; [the Pride Center] is coming to fruition,” Neal said.

The LGBTQ+ Pride Center is expected to be fully staffed in fall 2018.

A previous version of this article incorrectly referred to Emilie Mitchell as Emilli Mitchel in the photo caption.