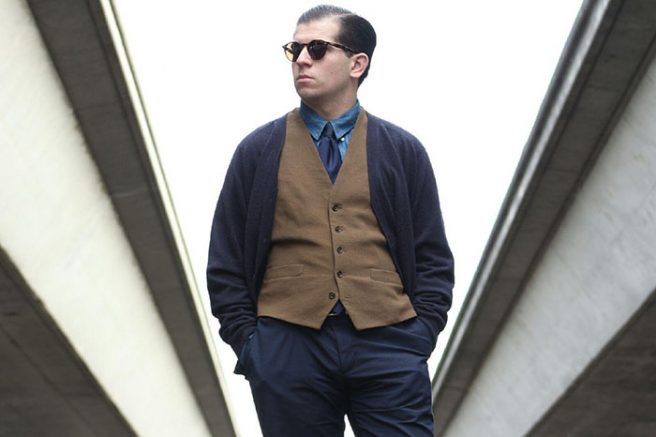 Sitting in a classroom, Ryan Speroni stands out amongst his peers for his unorthodox style; he’s  the only student who wears a tailored suit and tie with a vest to match every day.

After graduating high school, Speroni decided to change his wardrobe from casual attire to formal clothes because it made him more comfortable, but his first attempt at creating a new outfit wasn’t to his liking.

“I went to Macy’s, I got pants, I got vests, I got a shirt and I got a blazer..but then I found that the ties were just garbage. They were poorly made, nothing trendy and predominantly made in China and I thought ‘not my gig,’ so I’ll just do it myself,” Speroni said.

Speroni then asked his grandmother for help with creating some bow ties or neckties.

Shortly after the two were spending Sunday mornings shopping for fabric to make ties on her 1920s-era sewing machine.

With the determination to create his own brand, Speroni started a company in 2014 called Spero Accessories and began to market men’s coats and suit accessories on Etsy.com.

“What happens is with their fashion, it also implied an elegance. They weren’t sloppy in any way, they weren’t cavalier, they were very refined, they were gentleman and that really inspired me, so I thought ‘I gotta do what they’re doing,'” he added

“Ties, handkerchief, lapel flowers..I don’t walk out without a handkerchief in my pocket,” Lopez said while scrolling through Speroni’s Etsy page.

While he’s starting his business off small with mostly suit accessories, Speroni says he also plans to design a full outfit and showcase his art at a fashion show one day.

“We want to get full manufacturing before we go into stores because right now it’s myself and a few other seamstresses doing the sewing,” he added.

Nellie Karapetyan, a salesperson at Express, which sells men’s ties, said she liked the designs but that they don’t sell anything similar in their store.

Karapetyan added that she had never heard of anyone around his age having their own clothing line.

“We don’t use those kinds of materials but they’re nice,” Karapetyan said in reference to a velvet bow tie.

Speroni uses velvet, silk, cotton as well as polyester to design his ties. So far, he adds, he’s received a good response to his wares.

“The very first night I went out I got like three mentions on it, three compliments, and then I was like “wow, there’s something here. And so we’ve just been growing, growing, growing ever since with bow ties and neckties” Speroni said.