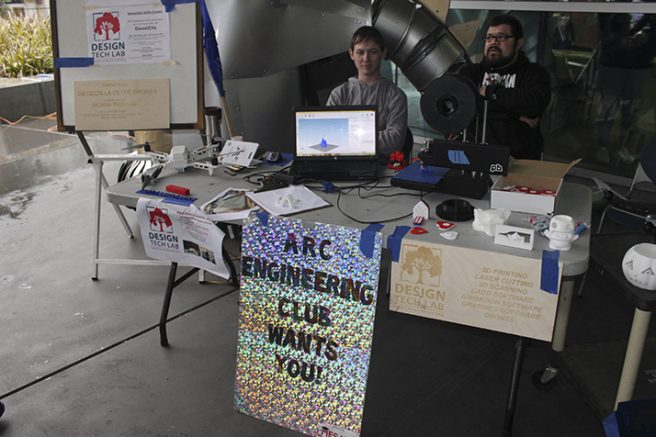 Jacob Olson (left) and Ben McNeilley (right) are shown sitting outside in the rain promoting for the American River College Engineering Club. The sign they have posted says “ARC Engineering Club Wants You.” (Photo by Mychael Jones)

The Clubs and Events Board held its semi-regular Club Day inside the Student Center on Thursday due to heavy rain that would have made the usual event location in the quad undesirable.

Club representatives set up tables inside the Student Center while arts and crafts vendors set up their displays in the cafeteria.

One of the few clubs to set up its  table outside was the Engineering Club, which was stationed in a covered area by the door outside the cafeteria next to a towering, Godzilla-like mobile metal figure named Diesel-Zilla, which breathes fire.

Diesel-Zilla was built with the help of the Engineering Club and clean diesel technology students in hopes that it will face off against drones, also designed by the club, in a laser battle at the California State Fair.

Ben McNeilley, from the Engineering Club, explained how students used the 3D printer sitting on the table in front of him to design parts for the drones they hope will face off against Diesel-Zilla.

“The drone is 3D printed in different sections, you can see the arms and the bodies are all separate and then bolted together,” McNeilly explained. “There are two different types and they were both designed by students here at the college. The motors aren’t 3D printed but part of the programming was done by the students and part of it was downloaded just to make it a little easier.”

The Engineering Club hopes that its competition at the State Fair will spark an interest in high schools to compete amongst themselves and attract them to be more involved with the design and production process.

Norman Moreno, from the Undocumented and Unafraid Club, was present and said his goal is a sense of community to undocumented individuals and their allies on campus.

“We want to make sure that the undocumented community is supported and that they know they can rely on people. It’s a club where people can network. Where people can have a voice and discuss their concerns,” Moreno said. “ We want to provide scholarships and we are trying to bring a lot of speakers to come in …anybody who can help contribute to the success of the students in the community.”

Moreno said he’s also been noticing students in the undocumented community are worried about the possibility of the current administration repealing the Deferred Action for Childhood Arrivals policy, which allows undocumented individuals brought to the United States  as minors a two year renewable period where they won’t be deported and are eligible for a work permit.

While DACA. has yet to be repealed, deportations of undocumented individuals whose children are sometimes U.S. citizens has already started.

Momna Shahbaz and Muhammad Tahir Shahbaz from the Muslim Student Association introduced students to their club and promoted awareness of Islam.

Muhammad Shahbaz explained that his club wants to promote awareness of the life of an average Muslim living in America, especially Muslims in college, and highlight the similarities between Muslims and other religions to cultivate more understanding and unity to lead to interfaith harmony and peace.

“Our focus at ARC is to reach out to the students and let them know that we care for them and we want to build an understand between everyone. We want to spread positivity and dispel any myths and debunk any misconceptions about Muslims. Islam is the most misunderstood religion in the world and one student at a time we’re helping to change that,” Shahbaz said.

Momna Shahbaz said that while students have been positive and nice during the event, they did encounter one student who blurted racist remarks at them and they were subsequently dealt with.

Student Senator Laurie Jones was seated at a table for the Progressive Democrats Club and said that both they and the Sociology Club were in need of a vice president to reactive as a club.

Jones said that the main qualification to serve as vice president is to have a 2.0 grade point average or higher and to sign her paperwork.
She also said she hopes that by the time of the publishing of this story, both clubs would have new vice presidents.

ARC dominates Lassen in second match of the day

Be the first to comment on "Engineering Club shows off creations at Club Day; others promote awarness"