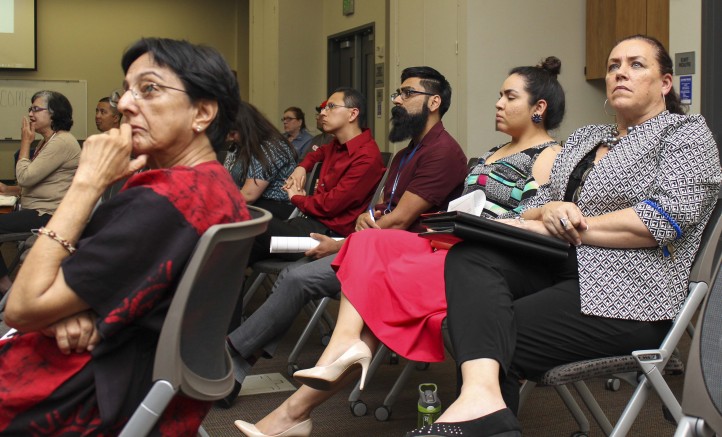 Faculty members and students from American River College attend a panel organized by UNITE on April 6 to hear the stories from Magdalena Loredo, Claudia Amaro and Jill Anderson (via Skype) about their experience as DREAMers in the US and Mexico. (Photo by Itzin Alpizar).

The children of unauthorized immigrants in the United States often face innumerable struggles, either embroiled in a legal battle for their rights or facing the daunting challenges that come with relocating to Mexico.

Because of this, a saying is popular among them that encapsulates the all-too regular feelings of alienation; that they are “neither here, nor there.”
They have been called DREAMers, immigrants who would have benefited from the DREAM (Development, Relief, and Education for Alien Minors) act’s renewable visas.

Maggie Loredo and Claudia Amaro are two such immigrants who visited American River College on April 6 to share their experiences, in a seminar hosted by the UNITE Diversity Center.

Los Otros Dreamers is more than just a book; it is a network, which connects bilingual and bicultural youths struggling with the immigration system.

According to Anderson, the project started while she was in Mexico City for a project concerning the experience of migration.

However, she met immigrants from the U.S. at a call center, and her priorities began to shift as they shared their stories with her.

“Upon arriving to Mexico, they faced challenges that they never anticipated,” Anderson said. “I was totally blown away.”

Amaro’s family sought a better life in the U.S. after her father was murdered in Mexico, but she later made the choice to move back in order to be with her husband, who received a 10 year ban and was deported as a result of being caught driving without a license.

“We didn’t think immigration would be an issue,” Amaro said.

However, when she moved to Mexico, the plea for help to the president she had written and his reassurances were “laughed at by the local government.”

“I felt alone. I felt like I was an alien,” she added.

Her high school education wasn’t recognized in Mexico, so she couldn’t graduate university, and her husband — who attempted to start a business — was kidnapped and held for ransom.

Even when seeking therapy for herself, her husband and her son, she said that “the therapist told us it was our fault.”

When the National Immigration Youth Alliance (NIYA) contacted her in 2013, she had to make a decision on whether to participate in civil disobedience and demand to be allowed to cross the border back into the U.S.

It wasn’t a difficult decision for her.

“I didn’t have to think twice,” Amaro said. “I wanted to go home… it was my only chance.”

Amaro became part of the Dream 9, along with 8 other immigrants who attempted to cross the border in a highly publicized event while wearing their graduation caps and gowns.

She was detained for a brief period of time at the Eloy Detention Center in Arizona and was later released back into the U.S. with her son.

Now, she has a work permit, and her next case is set for 2019, where she obtains to intend a visa.

Loredo told her story beginning with her being brought to the U.S. at age 2 and lived a relatively normal life until age 16, when she began looking for a job and for a car like her friends.

“I thought I was the same as everybody,” she said.

But without a Social Security Number, her options were limited.

She made her own decision to move back to Mexico at age 18, first staying with relatives in a small village where there was a lack of running water.

Then, she moved to a city, to work 16 hours a day for 300 pesos a week—the equivalent of 17 U.S. dollars, while struggling to obtain her legal documents.

Opportunity came to her in the form of a conference by Anderson on Los Otros Dreamers, where she met others like herself.

Loredo recalled thinking, “They understand me, they went through the same things.”

Though she pursued a college education as a business major, she was abruptly alerted that the school she had been attending for one and a half years was shut down.

The money she spent on her education was never refunded.

When Loredo finally made the decision to attempt to return to the U.S., Anderson supplied her with donations made to Los Otros Dreamers for her passport and her interview at the embassy.

“They said that they considered my case unique,” she recounted.

Loredo did obtain a 10-year visa, and went to Anderson immediately after.

“I ran to Dr. Jill’s house and gave her the news,” she said. “It was the best experience.”

Though most DREAMers go through similar struggles, not many of them are lucky enough to be able to return to the U.S.

Loredo recalled her friend Viridinia Vargas’ attempt to obtain a visa and what she was told by the embassy.

“(He said) “I don’t think you deserve to return to the U.S.” Who was he to decide that?” Loredo said.

Vargas, who is banned from any more attempts until 2022, is not the first person to have such an experience.