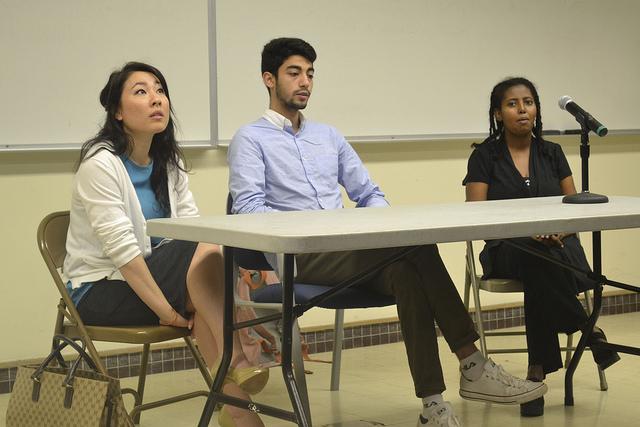 Former ARC student Semira Deneke started by going into detail on her home life,  leading to the journey of coming to America, the cultural shock, and things she has faced since arriving.

When asked what shocked her the most when she came into America, Deneke said “One day when I was at a bus stop an older lady came and there were no seats, so I got up to give her my seat out of respect and she fled as if I were going to rob her… I was very confused as to why.”

Mahmi immigrated at just 14 when his parents won the lottery.

He spoke of how he never faced prejudice due to how well he was able to blend in, but how he saw his parents face discrimination.

Mahmi talked about his life growing up in Morocco and how one day they got a letter in the mail about the lottery, but the only one in the house who spoke English was his sister, so she had to come home and read it to them.

His parents then chose for them to immigrate, and Mahmi explains the struggle he and his family had to go through when they first settled in New Jersey.

He then explained why they later moved to Sacramento, following his brother getting jumped at school.

When asked why his family thought it was a good idea to immigrate, Mahmi said “education-wise America is a better opportunity for me, to become a pilot and do the things I couldn’t easily do in Morocco.”

Hong spoke on her trials and tribulations coming from a refugee camp in Thailand, due to a civil war that killed her mother’s side of the family because they were rich.

She also told the story of how her parents met.

Hong explained her early life and immigration journey, and how she faced a big cultural shock in America as well as in China, because she looked different than most at her school.

Her school was predominately white, and Hong said she was viewed as too American for the people back in China.

Hong explains how she grew up in Roseville, California, went to “white schools” growing up and noticed how her classmates would treat her due to speculation and stereotypes.

When asked what her biggest cultural shock was when she moved to America, Hong said “I remember everyone being so nice to me in math class and then when I got to english class I got ignored as if I didn’t exist. But I came here as a baby so my first spoken language was English so that was always really weird.”

The students then closed out their stories and opened up a question and answer panel with the audience.