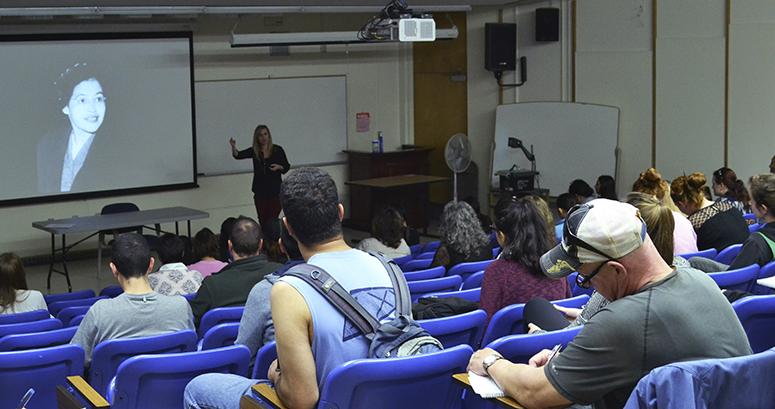 Their presentations consisted of poems, book readings, slide shows and open questions from the audience.

Professor Feely began the hour by saying “a lot of people know the name, but not the history.”

She went on to discuss Parks’ life before her activism and then her role with the NAACP.

She discussed Parks’ upbringing in the south, her work at the local military base during WWII, her work as a youth counselor with the NAACP, the Montgomery Bus Boycott and what factored into her becoming “the first lady of civil rights.”

“It’s important that we know our African American history,” Feely said. “I want students to be able to walk away with a little more history, something they didn’t know before.”

She ended her presentation with a poem titled “Rosa” by Pulitzer Prize winner Rita Dove.

Professor Leonhardt contributed further history on Parks’ influence in the Civil Rights Movement and her work after.

She discussed the Rosa and Raymond Parks Institute for Self Development, which was created in honor of Parks’ husband, and read a historical quote from Parks out of the book “I Dream A World” by Brian Lanker.

Both professors cited Parks’ faith, dignity, motivation and courage as factors in her decision making and the foundation of her activism.

References to Martin Luther King Jr., Emmett Till, the Brown v. Board of Education case, Tamir Rice and the Black Lives Matter movement were made throughout the presentations to relate past history and now.

“I’m very happy to be a part of this week’s college hour and to organize it with Abbey,” Leonhardt said. “I feel that it is very necessary, especially with the recent controversy.”

“I’m pleased with how many students were in attendance, I feel that they walked away with a greater knowledge of who Rosa Parks was and why she means so much in history,” Leonhardt said.

The celebration had a great turnout with outstanding student participation.

ARC student Loren Mcintyre said that he thinks college hour is a great weekly event to have, because it gives students the opportunity to learn outside of class.

“I wanted to attend because of the topic,” Mcintyre said. “I think this particular one was great to have since it’s black history month.”

Center for Teaching and Learning Director Amanda Corcoran, said she appreciates Feely and Leonhardt’s commitment to this college hour.

“The CTL appreciates both professors being a part of college hour and looks forward to their future contributions,” Corcoran said.

This particular college hour was in celebration of Rosa Parks day in California and black history month nationwide.