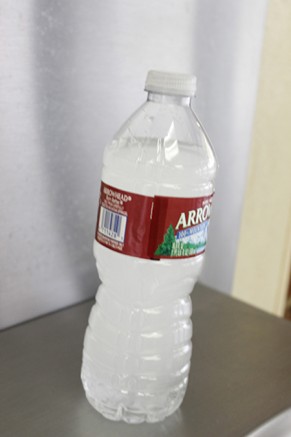 The murkiness of the water that comes from fountains at American River College have caused concern among some students regarding its safety. Despite this, ARC's administration insists that this is caused by air bubbles in the water. (Photo by Kevin Sheridan)

An earlier version of this story unethically included a quote from an off-the-record conversation between a reporter and a groundskeeper. After that conversation and before the publication of this story, the groundskeeper spoke with the editor-in-chief, who assured her that her statements would not be included in an article about the water on campus. The quote appeared nonetheless.

The American River College administration said that the milky appearance in some of the water fountains on campus is caused by air bubbles being introduced into the fountains to help the water flow better.

Dan McKechnie, the director of administrative services, said that the water would look the same even if this bubbler was moved to a different location and that if students are bothered by its appearance, they should wait for it to clear.

“If does (remain milky), we would have to do some investigation,” said McKechnie.

McKechnie said that the water is safe for students to drink.

“We test our water regularly, there is no immediate health concern,” he said. “It’s safe.”

ARC student Reid Bartlett said that he is mostly around the older water fountains in the music department and doesn’t think the water looks appealing.

“(It) doesn’t look good to drink, probably has something to do with calcium deposits,” he said.

Bartlett said that his decision about whether or not to drink the water “depends on how thirsty I am.”

2 Comments on "School says water appearance due to air bubbles"