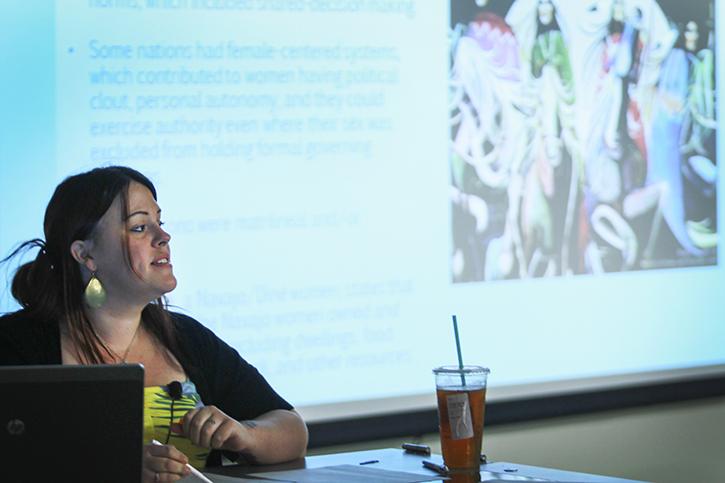 The second week of college hour sessions covering women’s history featured a discussion on the mistreatment of Native American women, including topics such as domestic abuse and sexism.

Sacramento State graduate student Dayna Barrios, who was the guest speaker for the event, began Thursday’s college hour by sharing a personal story of domestic abuse – her mother had been raped years before she was born, and her mother’s parents did nothing about it, believing that it was her own fault.

“One in three Native American women are assaulted or raped in the United States today,” Barrios stated. “This is extremely disturbing.”

She described how Native American societies are often matrilineal, a hereditary succession that passes beliefs and traditions through the female line, and that men and women in Native communities share responsibilities.

She went on to explain how the value of Native American women has eroded over time through colonization.

Women were forced to take on the societal structure of their European colonizers, which was a crucial shift from shared decision making with Native men to being treated like second-class citizens.

She also listed several YouTube clips of documentaries that expose the dark reality that rape and other abuse of Native women is not being talked about enough.

Angela Gutierrez, an art major at ARC who attended the college hour, felt the impact of Barrios’s discussion.

“I think its awful how so many women have some kind of abuse happen to them, and can’t do anything about it,” Gutierrez said. “It’s not fair at all.”

Barrios repeated throughout her presentation that the college hour was a safe place to share stories of abuse, and that it was okay if anyone felt the need to excuse themselves if the graphic statistics and clips were too much.

“I’ve been researching the horrible nature of domestic abuse of Native women, and I wanted women especially to know that it’s okay to talk about it,” Barrios stressed. “We need to talk about it more, so that it becomes a solvable issue, not one that is hidden.”

She included various hotlines and groups in her presentation for anyone who needs to talk about domestic abuse.
W.E.A.V.E., or Women Escaping A Violent Environment, is a 24-hour hotline available for people to reach out anonymously.

‘How to get a state job’ lecture given over spring break

College Hour screens powerful documentary about girls around the world