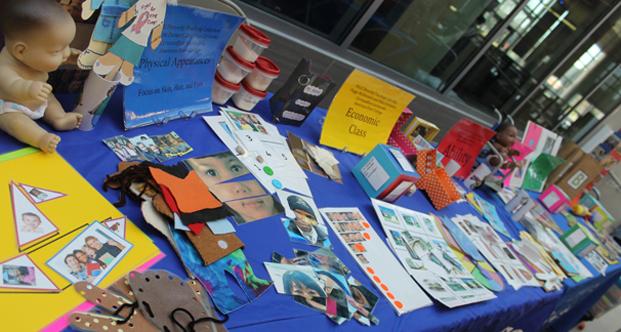 A table at the Diversity Day displayed examples and literature that are taught to our preschoolers concerning diversity.

Diversity Day on Friday became a platform for students to hear speakers tell informal stories about perseverance and respecting a job title without stereotyping.

The event also allowed audience members the opportunity to ask questions and allow for feedback from the storytellers.

Kristina Casper-Denman, a professor of anthropology, coordinated a day in which speakers presented their thoughts on what cultural diversity represents, with former American River College students speaking on their specific knowledge of controversial topics.

According to Casper-Denman, the speakers from this years diversity day were different from last year’s.

“We have changed with each event we set up,” said Casper-Denman.

The first person to speak at the event was Bruce Rand, an anthropology major.

Rand’s presentation was entitled ‘Bridging the Gap in the Time of Loss’ and talked about experiencing loss in culturally diverse families.

Rand worked as a funeral director who experienced grief first hand and also had a difficulty in identifying with a deaf family.

“I never have to wait two hours again for an interpreter,” Rand said. “I am currently taking SILA 330 with Professor Hauschildt.”

Rand spoke about the difficulties with grief when talking about the death of a family member, the distinctions between if a person was murdered or committed suicide and if the deceased person was LGBT.

“You have to respect the sensitivity of the fact that there is a murder,” Rand said. “I picked up an accidental suicide… the guy was transgender, but the family called the person a ‘him’ even though they were in a dress… we have to respect that person.”

Rand commented that on a rule he followed that kept him composed as a funeral service director.

“Keep your eyes open, mouth shut… listen to what the family has to say,” said Rand.

Rochelle Van Driel’s presentation was entitled ‘Who is that Senior in Your Neighborhood? Helping Hands in the Community.’

She talked specifically about assisting seniors with aging-associated cognitive decline and persons with alzheimer’s disease.

Van Driel graduated from ARC in 2008 and received her masters in Counseling Psychology in 2011 from Sacramento State University.

Van Driel commented that students at ARC can help volunteer through the National Alzheimer’s Association.

The Alzheimer’s Association has resources to help people with dementia.

“There’s a lot of camaraderie,” said Van Driel when referring to volunteers that help patients with ALZ.

Van Driel also commented on the study of gerontology, which is the study of the aging through social and cognitive behaviours.

Former ARC student Gordon Worley graduated from ARC in the 1980s with a basic education in nursing.

“Nursing at ARC is a good program as well as an entry program,” said Worley.

Worley presented ‘Just call me a nurse: Reflections on a career in nursing,’ which discussed the diverse relationships between male and female nurses.

“There are more women in management roles,” said Worley.

In 2002, Worley became a flight nurse in the program called Relief for Energy Assistance through Community Help, also known as REACH.

REACH is sponsored through the Pacific Gas and Electric Company.

“I will earn my master’s in nursing at Sonoma State in 2015,” added Worley.
Worley’s wife Katrina Worley has a master’s degree in Behavioral and Social sciences and is currently a professor at ARC.

Be the first to comment on "Diversity Day commemorates cultural differences"