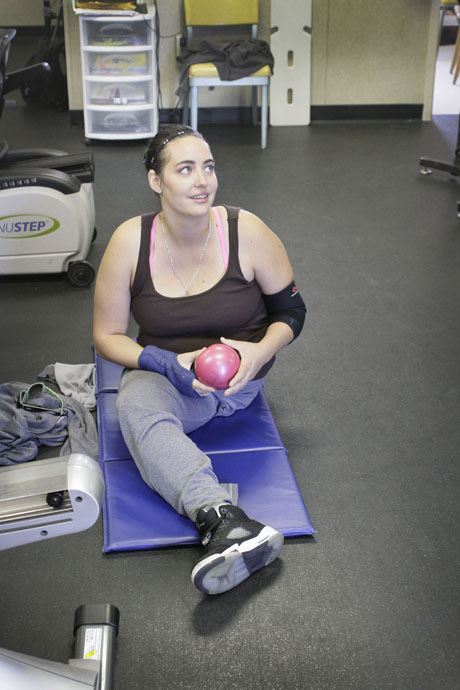 After  having lost her left leg to cancer, American River College student Alicia Szutowicz spends hours on campus training to compete in wheelchair basketball, an event in the Paralympic Games.

She said she felt pain in her leg while she was running during boot camp training at ARC in August 2007. After running for three miles, Szutowicz began to fall over.

After a visit to the doctor, she was told she had Ewing’s sarcoma, a kind of bone cancer usually found in children, according to the website Genetics Home Reference. She visited the hospital during Super Bowl XLI and had her leg amputated in the same year.

“(The game) was Bears versus Colts. I’m a huge Bears fan, so I thought (being there) would be good luck,” Szutowicz said.

“I knew I had cancer before they even told me.”

Szutowicz says her and Rodriguez act differently around each other when playing wheelchair basketball than they do in their daily lives.

“We have come to this agreement; we have no relationship,” Szutowicz said. “On the court, it is all business.”

Szutowicz said she serves as a recruiter for her wheelchair basketball team.

“Everytime I see someone in a wheelchair, anywhere, I chase them down (and ask), ‘Do you play sports? Do you want to?’’ said Szutowicz.

According to Szutowicz, the Rollin’ Kings are close with one another. “We are family, because no one else has disabilities. You probably have friends, but maybe (you’re) the only one who has disabilities out of them. Having someone to relate to is key.”

Her adaptive P.E. instructor, Jeanette Allred Powles, a track coach at ARC at the time of Szutowicz’s operation said she did not initially recognize Szutowicz when she returned to ARC from Arizona.

Szutowicz was playing wheelchair basketball in Arizona for a year.

Powless and a P.E. instructional aide, Brian Sprinkle, both said Szutowicz’s presence is beneficial to the class.

“She’s very driven and she is very motivational, so she is a very positive person to be around,” Powles said. “Not only does she do a good job in the class, she motivates other people.”

Added Sprinkle, “She is willing to help others if they need it. (She) also sets an example on how to work hard in a weight room.”

Szutowicz has a three year old daughter who loves to play in her mother’s wheelchair.

“She can backup, turn around, and spin in circles. She can do the same in a basketball chair. She’s going to make a really good wheelchair basketball player,” Szutowicz said.

Szutowicz said she is pleased where she ended up in her life, adding that losing her leg was the “best thing that could have happened in the worst way.”

“I have a very fulfilling life in a short amount of time,” Szutowicz said. “If I left the earth tomorrow, I would be satisfied.”