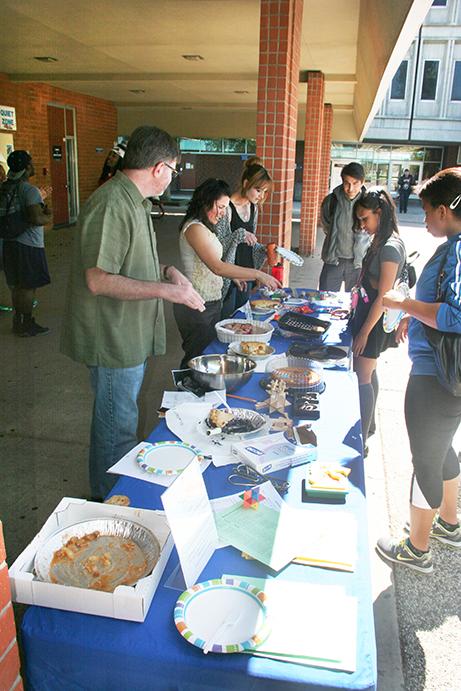 The American River College math department held its first ever Pi Day celebration, which included free pie, math puzzles and an information session on careers in mathematics, on Thursday, March 13.

Pi Day is traditionally celebrated on March 14, but the math department celebrated early to accommodate students.

“Fridays are less populated on campus, that’s why we chose it on March 13,” event organizer and ARC math professor Rocio Owens said.

The information session, held in the Liberal Arts 170 classroom, included time for questions and answers, free pie, information sheets and a PowerPoint presentation given by Aubert and Owens. According to the presentation, some careers available to math students, depending on the education level and are of narrower field of specialization, are financial services, banking and data security.

About the goal of event, John Aubert,  dean of the math department said, “We wanted to not only highlight the courses and degrees we offer here at ARC, but also the transfer and career opportunities available in math.  Additionally, we wanted to have a little fun highlighting the importance of the number Pi.”

Besides the information presentation, students could stop by a table set up outside of the Liberal Arts 170 and receive a slice of pie after solving some kind of math puzzle or after measuring a circumference of various circular objects–like a CD, an Oreo cookie or a vinyl record.

Other attractions at the table included a math puzzle and Pi facts, including the chronology of the number.

“We didn’t quite know what to expect, because this was the first time we hosted such an event,” Aubert said regarding attendance. “Though some had to arrive late or leave early, we had approximately 15 students attend the information session.  There were many more than that who stopped by our information table outside in the breezeway.”

Although this was first event of its kind for the math department, more are expected to come.

“We hope to offer such information sessions once or twice per year.  There is a big movement in community colleges to have professors work more closely with counselors to help prepare and encourage students to earn degrees and fulfill their educational goals.  This is just one of the ways we hope to contribute to this movement,” Aubert said.

Be the first to comment on "Pi and Pie at ARC"